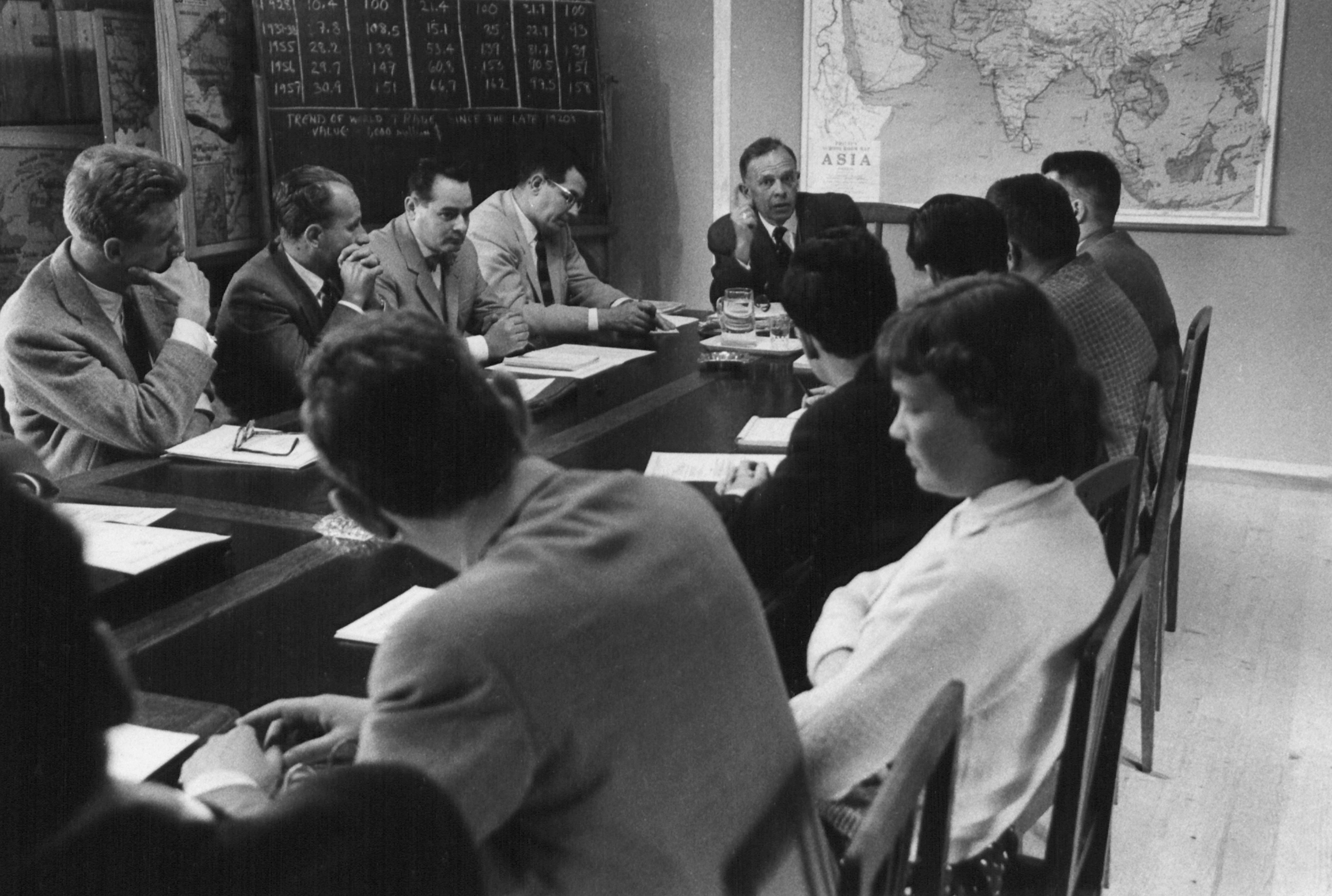 Our New Research series provides us with an opportunity to highlight recently published reports written by researchers who have received stipends from RAC to pursue their studies in our archival collections.  In this edition of the series, the authors have used the papers of Nelson A. Rockefeller and John D. Rockefeller 3rd, the records of the Rockefeller Foundation, the Rockefeller Brothers Fund, and the Ford Foundation, and the Taconic Foundation, as well as archival materials from the Office of the Messrs. Rockefeller.

In the post-World War II era, international friendship projects in American and British civil society were a means to foster internationalism in a period fraught with Cold War tensions.  They emphasized the importance of person-to-person contacts.

In her research report, “Friends in Foreign Places: International Understanding in Post-War Civil Society,” Anna Bocking-Welch looks at how Rockefeller philanthropic support was involved with the Experiment in International Living, the Asia Society, and the Eisenhower administration’s People to People Program to better understand the forces at work to foster internationalism.  Dr. Bocking-Welch’s report explores the role of emotion and intimacy in shaping transnational relationships in the aftermath of the Second World War.

While civic internationalism had a natural ally in the Wilsonian vision of peace during the interwar era, the dynamics of the atomic age were very different.  Indeed, her findings suggest that during the postwar period, there was an ever-present tension between the ideals of a romantic internationalism and a sense that internationalism could be a tool to further US foreign policy goals.

Dr. Anna Bocking-Welch is a lecturer in the Department of History at the University of Liverpool.  Her teaching and research interests center on modern British history in imperial and international contexts, with a particular focus on youth, histories of humanitarianism, and the social and cultural impacts of decolonization.

In “Grace McCann Morley and the Office of the Coordinator of Inter-American Affairs,” Berit Potter provides us with insight into one aspect of the career of San Francisco Museum of Art’s first director: her work for Nelson A. Rockefeller, starting in 1940.  At that time, Nelson Rockefeller served in Franklin Roosevelt’s administration as the coordinator for the Office of Inter-American Affairs.  He called upon Grace Morley to serve as an advisor to the OIAA and its Committee on Art.

As an effort in cultural diplomacy to strengthen bonds between the US and Latin America, this committee planned exhibits of Latin American art both in the US and throughout Latin America.  Much of the work of the OIAA was aimed at bolstering the US position throughout the Western Hemisphere to counter Nazi attempts to increase influence in the region.  Dr. Potter’s time working through archival material in the Nelson A. Rockefeller Papers provided her with important context on these activities and deepened her understanding of the significance of Grace McCann Morley’s work.

Berit Potter is an assistant professor of art history and museum and gallery practices at Humboldt State University.  Her research interests encompass the issues of display, including the reception of Latin American and US modern art on the West Coast, and use of exhibitions as propaganda during World War II.

“Berlin, a ‘Hollow Shell’: The City as a ‘Laboratory Study’” by Till Greite

Nazi Germany’s defeat transformed Berlin from a center of power to a crushed and divided city, suddenly pushed to the periphery.  For West Berlin, the Cold War reality of being a “Western island” in the center of East Germany magnified the situation.  Till Greite’s research report, “Berlin, a “Hollow Shell”: The City as a “Laboratory Study” – A Report on the Ford Foundation’s Cultural and Artistic Projects in Post-war Berlin,” looks at the role that one philanthropic organization played in helping to shape a new identity for the city.

The researcher notes that West Berlin was thrust into a completely new position during this post-war period.  It was now located on the front lines of Cold War tensions between East and West.  At the same time, the city faced massive economic challenges as “half” of a city without a hinterland, as it was cut-off from West Germany, yet isolated from East Germany.  It was also under tremendous demographic pressures of out-migration that needed to be stemmed.

Part of the solution was to redefine the nature of the city, to alter its identity as a cultural center expressing the creativity of Western democratic society.  This was a very tall order for the city to carry during those trying times.  In the report, Greite documented the massive financial commitment by the Ford Foundation to help cultivate cultural life in West Berlin, much of which was spearheaded by Shepard Stone.  He reflects that despite its generous and focused grantmaking, the Ford Foundation came to realize that its largesse was only partially successful in bolstering efforts to turn West Berlin into a cultural capital.  The realities of Cold War tensions and the dark shadow of Berlin’s complicated past prevented the city from completely fulfilling the lofty goals of the funders.

“The Ford Foundation’s 1970s Program for School Finance Reform: Origins and Overview” looks at a particular chapter in that philanthropy’s support for public education.  In this report, Kelly Goodman explores the foundation’s engagement with efforts at reforming the process and formulas for school funding in the 1970s.  She identifies two separate components to Ford’s grantmaking in this area: reforming discriminatory finance formulas and building the “intellectual strength” of urban education.

Dr. Goodman highlights the role of program officers Edward Meade, Jr. and James Kelly in recalibrating Ford’s approach to supporting public education in the direction of concentrating on urban centers (particularly for underserved communities). An important marker for this process was a 1968 Ford Foundation white paper on disparities in school funding.  As part of this new agenda, the foundation began funding graduate training and support for researchers studying educational funding reform.

Kelly Goodman also points out that her research at RAC led to an unexpected finding.  She had been previously unaware of the existence of the Taconic Foundation, a small philanthropy that focused on civil rights and what was called the “urban crisis.”  Her exploration of these records at RAC revealed that some of these same education reformers who had interested her in the Ford Foundation records also appeared in Taconic records, since they had also been in conversations with that foundation about support for their work.  In one case, a grant proposal to Taconic by legal theorist John Coons revealed his early thinking about how to convert his idea for “family power equalizing” to one applicable to “school district power equalizing,” a concept that the Ford Foundation was soon to support. This discovery reinforced for Goodman the value of the “serendipity factor” in archival research.

Kelly Goodman received her Ph.D. from Yale University, and her research interests center on the political economy of American school finance.

About the RAC Stipend Program 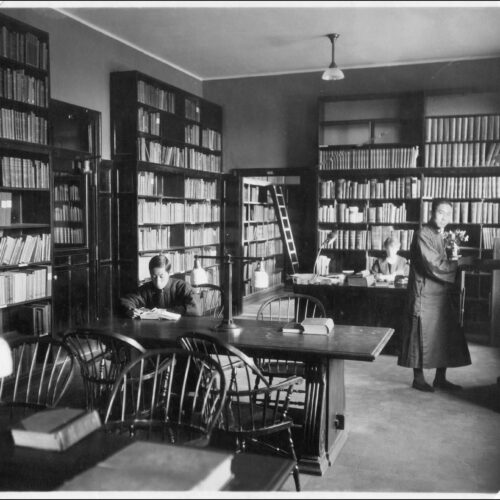