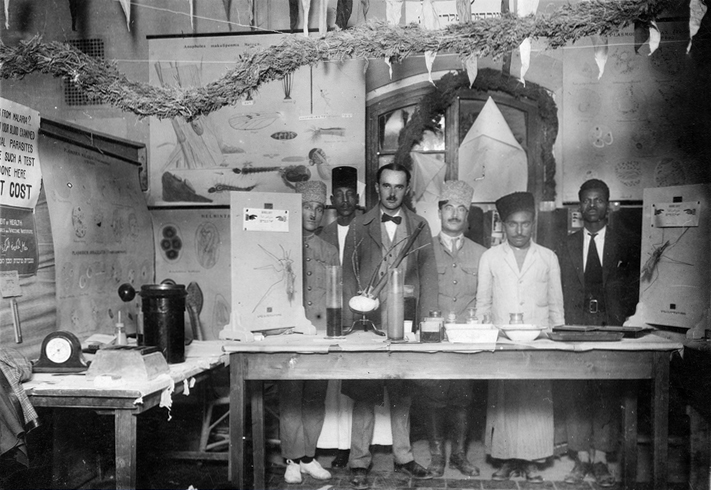 For the current edition of our New Research series, we present four recently published RAC Research Reports. These papers cite a number of sets of RAC collections: the records of the Ford Foundation, the Rockefeller Foundation, the Rockefeller Brothers Fund, and the Office of the Messrs. Rockefeller, along with the papers of John D. Rockefeller 3rd, RF officer Charles B. Fahs, and Ford officer Francis X. Sutton. The breadth of the topics in these reports provide a small peek at the expansive archival holdings at RAC.

In “Rockefeller Philanthropies and Malaria Control in Early 20th Century Palestine,” Omri Tubi looks at the engagement of the International Health Board and Rockefeller Foundation with authorities of the British Mandate which controlled Palestine following World War I. Tubi points out that the story of the battle against the disease was intertwined with efforts to facilitate Jewish settlement in the country.

The Malaria Research Unit, which was part of the British mandatory authorities’ health department, was funded by American Jewish organizations in support of Zionist efforts for a Jewish homeland. Microbiologist Israel Jacob Kligler was the key figure in the work of this malaria unit. His initial career had numerous Rockefeller connections and he brought Rockefeller-learned methods to his position as head of the unit. Prior to his arrival in Palestine, Kligler had been a scientific investigator at the Rockefeller Institute for Medical Research in the 1910s and then worked with the Rockefeller Foundation’s Yellow Fever Commission in Latin America.

Tubi closes out his report by reflecting on how this particular story about public health efforts in Palestine is part of a larger story of Rockefeller philanthropic impact on the transnational exchange of scientific knowledge that developed in the early twentieth century.

Omri Tubi is a doctoral student in the Department of Sociology at Northwestern University, studying the role of public health policies in state formation.

“Searching for Female Agency among Documents: Postwar Japanese Female Intellectuals and Their Network” by Hiromi Ochi

In her research on Cold War era United States-Japan relations, Professor Hiromi Ochi has looked at the role of librarians in fostering cultural ties between the two countries. This subject underscored for her the Japanese female intellectual networks that expanded access and interest in both countries’ literature.

Dr. Ochi’s research report, “Searching for Female Agency among Documents: Postwar Japanese Female Intellectuals and Their Network” relies on her study of documents in the records of the Rockefeller Foundation, along with the papers of John D. Rockefeller 3rd and Rockefeller Foundation officer Charles B. Fahs. Her research in these records reinforced the ongoing challenge that she has faced in finding “hidden figures” – these Japanese women, so central to US-Japan cultural engagement, were for the most part anonymous in the archival records. Hiromi Ochi explains that experienced library experts, such as Shiho Sakanishi and Naomi Fukuda, were essentially made faceless and nameless in the male-dominated environment in which they worked.

In this context, in addition to her discussion of the role of libraries in fostering cultural relations, she reviews the process by which she successfully uncovered archival material on these professional women who were key to the process.

Dr. Ochi is a professor in the Faculty of International Communications at Senshu University.

“‘A Most Interesting and Complex Involvement’: Cold War Alignments between the Ford and Rockefeller Foundations, the Congress for Cultural Freedom, and the Central Intelligence Agency” by Harm Langenkamp

Records from the Ford and Rockefeller Foundations reveal an internal balancing of risks against responsibilities regarding the question of grant support, all taking place during the postwar period of heightened competition and tension between East and West. His report highlights the critical role played by a number of well-connected advocates of government-philanthropy collaborations in foreign affairs, such as John McCloy and Shepard Stone from the Ford Foundation, which tipped the scale in favor of cooperation with the CIA. Harm Langenkamp observes that by the time the Ford Foundation finally decided to commit itself substantially to the Congress for Cultural Freedom, fate struck and exposed its link with its CIA secret patron. While a revamped CCF continued (under a different name) into the 1970s, changes in public opinion, new program directions for the foundations, and the arrival of détente ended this historical chapter.

Dr. Langenkamp continues his connection with Utrecht University, now as an affiliate researcher, studying and teaching about the connections among culture, politics, and economics.

“Researching Human Rights at the Rockefeller Archive Center” by Sarah B. Snyder

Sarah B. Snyder is a professor at the School of International Service of American University in Washington, DC. She is an historian of US foreign relations, with a particular interest in the Cold War, US human rights policies, and organizations supporting human rights activities.

Her report, “Researching Human Rights at the Rockefeller Archive Center” details her experiences conducting research in the records of the Ford Foundation and the Rockefeller Brothers Fund. The focus of her time at RAC was on the grantmaking activities of these foundations during the 1960s and 1970s supporting a series of nonprofit organizations fostering human rights. Snyder reviews some of the key documents that she discovered regarding domestic human rights policies, as well as files on American NGOs working for international human rights efforts. She also observes that visiting archives frequently involves a degree of serendipity.

In looking at material on Arthur J. Goldberg’s tenure as US ambassador to the United Nations, Dr. Snyder found materials in the Nelson A. Rockefeller Papers that are very revealing about Rockefeller campaign tactics toward Goldberg’s challenge to his governorship in the 1970 elections. Archival research often leads to the unexpected!