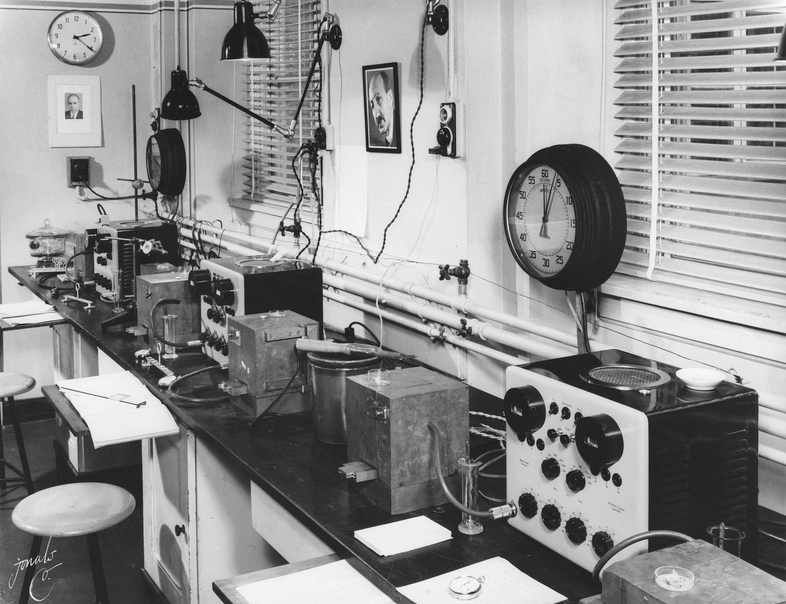 From the vantage point of today’s well-funded scientific research infrastructure, it is difficult to believe that in the early twentieth century, support for the sciences in the United States and many other countries was no greater than support for the arts and humanities, and often less. In 1913, when the Rockefeller Foundation (RF) began, universities spent far more on teaching in all disciplines than on research of any kind. Modern science, however, depends upon research and required expensive equipment and laboratory facilities. Furthermore, an effective research infrastructure required a new generation of professionally trained scientists with opportunities to work together.

Early efforts by other Rockefeller philanthropies set the stage for the Foundation to fund research in physics, with the aim of supporting the conditions for scientific innovation and breakthroughs. The General Education Board (GEB) endowed university departments in the United States, while the International Education Board (IEB) endowed European universities and research institutes and supported an elaborate fellowship and exchange program within Europe and between Europe and the US. The Foundation also supported a fellowship program before moving more directly into research funding in the 1930s, when it built upon the groundwork laid in physics and chemistry to promote interdisciplinary research across the sciences.

Creating a “Future Flow of Persons”

The Rockefeller Foundation, with its mandate to improve the “welfare of mankind” initially bypassed the natural sciences in favor of supporting public health campaigns and medical education. Yet within five years of its founding, the need to expand scientific knowledge in order to support the other endeavors, signally the improvement of medical education, grew increasingly clear. But after the negative publicity garnered by the Foundation’s brief involvement in industrial relations, the trustees were wary of extending RF involvement into new fields, and particularly of directly operating any new programs. Moreover, the trustees felt that neither they nor the RF’s program officers knew enough about science to evaluate research proposals.

In 1919 the Foundation devised a compromise. It would fund fellowships in the sciences through the National Research Council (NRC), whose board comprised university professors, industry professionals, and representatives from government agencies. The NRC would take charge of selecting fellows and would administer the program. In its first year, six fellowships were granted in physics and seven in chemistry. Thirty years later, over 1,000 fellows had been supported by RF-NRC funds, including many who went on to win the Nobel Prize.

Wickliffe Rose’s tenure as head of the International Education Board (IEB), which began in 1923, moved the Foundation closer to direct involvement in the sciences. Rose, a former philosophy professor who was self-educated in physics, confidently began to identify promising European researchers and key institutions deserving of IEB funding. Major institutions the IEB supported included the University of Göttingen’s Institute of Physics and its Mathematical Institute, the University of Copenhagen’s Institute for Theoretical Physics, headed by Niels Bohr, and the University of Paris’s mathematical center, the Institut Henri Poincaré.

Domestically the GEB, also headed by Rose, was the principal Rockefeller agency funding the development of the physical sciences. Major grants for the establishment or improvement of physics departments included $2.5 million to the California Institute of Technology (Caltech), $1 million to Vanderbilt University, $2 million to Princeton University, and $2.5 million to the University of Chicago, a perennial recipient of RF funding. GEB funds built the Lyman Laboratory for Physics at Harvard and supported the graduate program at Stanford University.

Perhaps the most important GEB contribution to the advancement of physics in the US was its support for Caltech, where a group of NRC and IEB fellows assembled throughout the 1920s and transformed the small engineering school into a world-renowned center of quantum physics research. These included Paul Epstein, Gerhard Dieke, Carl Eckart, J. Robert Oppenheimer, Linus Pauling, William V. Houston, Howard P. Robertson, and Fritz Zwicky. The fellows came to study with a Caltech faculty built by Robert Millikan, formerly of the University of Chicago, who had a long-standing association with the Foundation.

The centers of concentration funded by the GEB and the Rockefeller Foundation coalesced into a tight network that recruited faculty from each other’s ranks and trained new generations of graduate students, and thus the RF staff remained intimately associated with the major developments in physics in the United States. Karl T. Compton, for example, a specialist in electronics and spectroscopy, directed Princeton’s Palmer Laboratory and chaired that university’s department of physics in the 1920s, where he built a top-notch faculty with the help of GEB funds. Compton became President of the Massachusetts Institute of Technology, another perennial RF grantee, and in 1941, he became an RF trustee, remaining one of its most active board members for over a decade.

Connecting Physics to Chemistry and Biology

Biologically oriented physics projects included the effects of radiation on living matter, processes of nerve conduction, a study of the movements of brain and heart waves, and spectroscopic approaches to understanding atomic energy. As science became, in the words of RF President Raymond Fosdick, the study of “smaller and smaller units of nature,” the Foundation was particularly interested in radioactive tracer isotopes, a technique invented by George de Hevesy at Stockholm with IEB support and continued with the Foundation’s support in both Stockholm and Copenhagen, where Hevesy collaborated with Bohr.The Rockefeller Foundation, Annual Report 1939 (New York: The Rockefeller Foundation, 1939) 35.

Warren Weaver believed that the new tools that enabled the “drive toward smallness” essentially involved three basic activities: separation, identification, and seeing.Warren Weaver, A Quarter Century in the Natural Sciences (New York: The Rockefeller Foundation, 1958) 37. The research the Foundation supported in the mid-twentieth century depended on the development of new devices such as the ultracentrifuge (a powerful separator of colloid proteins), the electron microscope (which enables particles to be viewed at the molecular level), and the cyclotron. A cyclotron is a particle accelerator that separates matter at the atomic level by spinning it along a spiral path by using static and variable magnetic fields. The Foundation funded the work of Leó Szilárd, who invented the cyclotron, and eventually supported the construction and installation of several cyclotrons in the US and Europe. Its biggest single contribution, totaling more than $3 million, helped construct the massive and unprecedented 200-inch cyclotron at the University of California, Berkeley in 1939. While initially developed for biomedical purposes, the Berkeley cyclotron achieved unexpected notoriety when it demonstrated how Uranium 235 could be separated to produce sufficient material for an atomic bomb.

The destruction caused by World War II, including the contribution of Foundation-funded physics to the development of the atomic bomb, left the RF wary of “pure” research science in the war’s aftermath. The war raised questions of use, values, and moral responsibility that could not be addressed by science itself. Moreover, the war revealed the limitations of scientific objectivity, heightening the Foundation staff and leadership’s awareness that science could easily be manipulated by politics. In the postwar era, the Foundation moved away from funding experimental physics, in part because it had learned it could not control its applications. “In the supreme question which faces our generation,” wrote RF President Raymond Fosdick, “physics and chemistry and engineering have no answers for us.”The Rockefeller Foundation, Annual Report 1947 (New York: The Rockefeller Foundation, 1947) 9.

The Foundation responded to the advent of the atomic bomb by asking the Division of Social Sciences to convene top atomic scientists to consider the peacetime uses of atomic energy and its potential benefits and hazards. It also underwrote a series of public opinion surveys on atomic energy administered by Cornell University. The postwar boom in military, industrial, and government support for scientific research enabled the Foundation to withdraw from its leading role in funding basic research. Beginning in the 1940s, the RF concentrated its science funding on plant breeding and crop science, mobilizing that knowledge toward the goal of eradicating hunger by taking on problems of food security in developing nations through a comprehensive agriculture initiative.