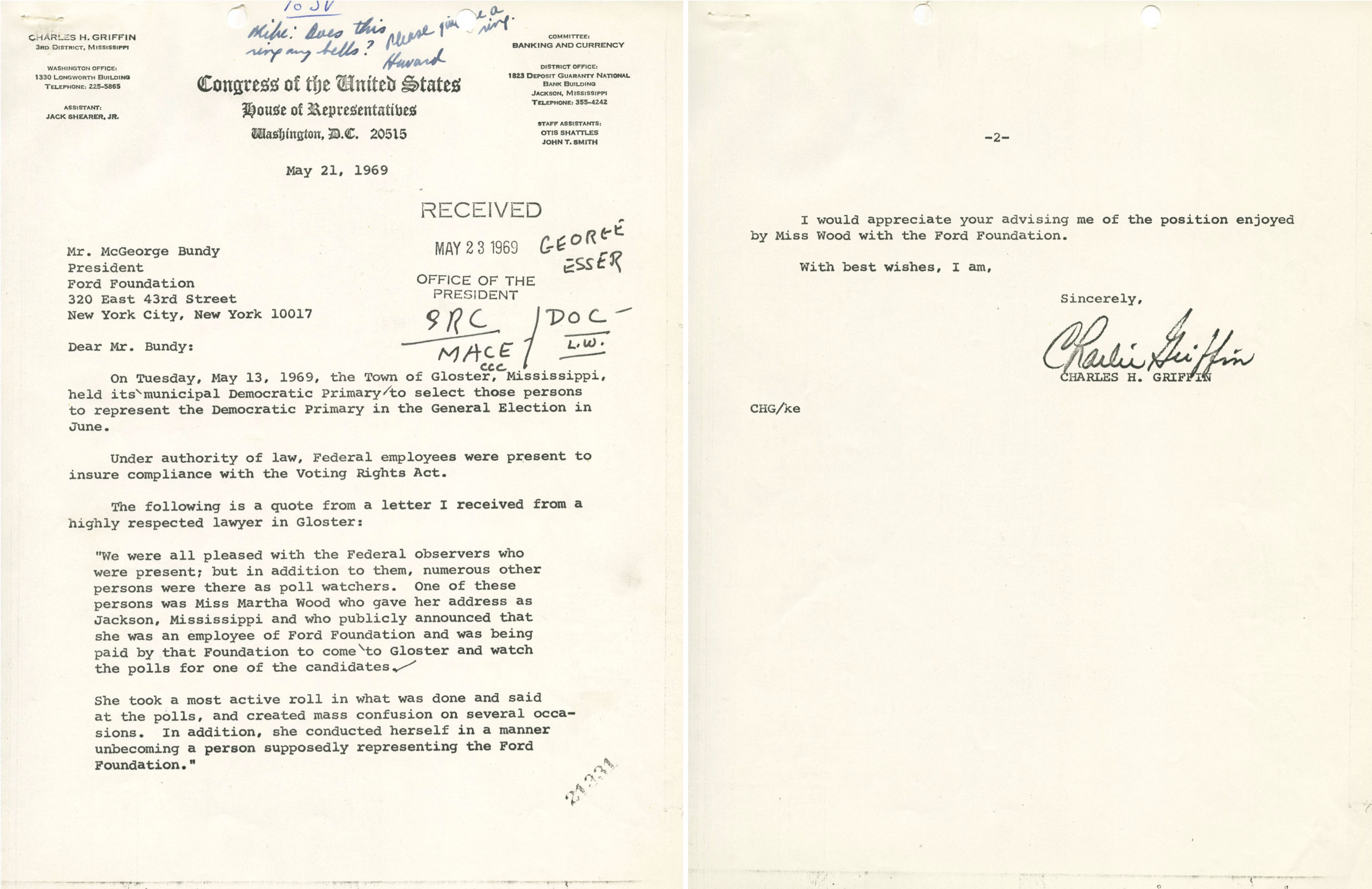 From Populist Crusade to Comprehensive Regulation: the Tax Reform Act of 1969

Fifty years ago, on December 30, 1969, President Richard Nixon signed into law a tax reform act that still forms the basis of all not-for-profit regulation.

For many decades both before and since, the US tax code has been the principal mechanism for the federal government’s regulation and oversight of foundations.

Regulation of the charitable sector has been a slow but steady process. The Revenue Act of 1934, for one, prohibited lobbying and propaganda activities by all charitable organizations. In 1943 federal reporting standards were introduced, requiring foundations to submit annual financial reports to the Internal Revenue Service. Amid growing concerns in the late 1940s that charitable status was being used to protect commercial profits, the Revenue Act of 1950 denied tax exemption to businesses, so-called “feeder corporations,” whose profits were being channeled to charitable organizations.

In 1961, Congressman Wright Patman (D-TX), a cherubic and deceptively soft-spoken populist from East Texas, began a solitary eight-year crusade against American foundations.For a biography of Patman, see Nancy Beck Young. Wright Patman: Populism, Liberalism, and the American Dream. Southern Methodist University Press (2000).Through the House Committee on Small Business, Patman formed a sub-committee of one. The crusading congressman was worried as he watched the rapid proliferation in the numbers of American foundations.

“Down in Houston there are some neighborhoods so rich that every flea has his own dog. The Rockefellers are like that. Every one of them has his own foundation.”Wright Patman, quoted in the Taylor Daily Press. Thursday, February 20, 1975.

Unlike earlier critics involved in the Walsh (1912), Cox (1952), and Reece (1953) congressional inquiries, Patman did not dwell obsessively on whether foundations were too liberal or too conservative. Rather, he concentrated on their economic role, looking at tax returns and financial statements.

Ultimately, Patman generated more than five thousand pages of reports. Unfair competition between small businesses and nonprofit organizations particularly troubled him. The impact of aggregate foundation wealth, which he calculated to be about $10 billion in 1960, on financial markets worried him. So important was this economic role, Patman believed, that he blamed foundations for a stock market plunge in 1962.

Abuses of Wealth and Power

More disturbing than the economic role of foundations generally were some of the shocking abuses of foundation status that Patman uncovered. He exposed individuals and families who lacked any charitable intent and whose foundations were set up purely for private benefit. He decried the drain on the US Treasury caused by this steady “drift of wealth” into tax exempt organizations. He argued in 1964:

“More and more, the cream is slipping out of our tax system as the great fortunes go into tax-exempt foundations. The skim milk incomes of average, hard-working families must then shoulder an increasing part of the tax burden, both Federal and State.”United States Congress, House Select Committee on Small Business. Tax-exempt Foundations: Their Impact on Small Business. Hearings Before Subcommittee No. 1, Ninetieth Congress, First Session. (1967) p.3.

Concerned about the lack of accurate financial information and the administrative failures of the IRS in overseeing tax-exempt groups, Patman badgered the Treasury Department into starting its own investigations. Furthermore, he embarrassed the IRS into stepping up its enforcement of the existing tax laws.

A Treasury Department report, which was delivered to both the House Ways and Means Committee and the Senate Finance Committee in February 1965, absolved the majority of foundations of wrong-doing and supplied enough solid evidence to refute Patman’s assertions that they exerted excessive influence over the US economy. But it did confirm some of the problems Patman had railed against.

The Treasury Department’s 1965 study proposed a number of solutions that would be debated, modified, and in many cases incorporated into the 1969 Tax Reform Act.

The report identified obvious cases of self-dealing and recommended an absolute prohibition on transactions that benefited donors, their families, and other insiders. The report singled out some foundations that had merely accumulated wealth, while making little or no effort to provide charitable benefits. Treasury officials recommended that foundations pay out all their income within a year (since changed to the now familiar five percent payout rate).

As a solution to unfair competition, the report proposed that foundations be prohibited from holding more than 20 percent of the stock of a company if its business was unrelated to the foundation’s charitable purposes. Other measures were proposed to prevent families from using their foundations to control commercial enterprises or to hold real estate.

Hoping to make foundations more publicly accountable, the report also recommended that after twenty-five years the donor and other related individuals not constitute more than twenty-five percent of a foundation’s board.

With budget deficits mounting in the 1960s as the government sought to meet the costs of both domestic Great Society program and the war in Vietnam, reform of the tax code grew more urgent.

When the Treasury Department disclosed that in 1967 twenty-one people with incomes in excess of $1 million paid no taxes at all, as well as another 155 people with incomes over $200,000, reform seemed inevitable. In 1969, the House Ways and Means Committee began hearings on general tax reform, devoting the first week of testimony to any easy and long-standing target: foundations.

Patman was the first witness at the hearings, arguing that the nation could no longer afford the luxury and the inequity of private foundations. Foundation witnesses followed with evidence of their accomplishments. But, in the end, some who testified did more to hinder than to advance the foundation cause.

Perhaps the most notorious of these was Ford Foundation President McGeorge Bundy, who had an especially difficult time as he tried to defend the foundation’s travel and study grants, totaling more than $130,000, to eight former staff members of slain Senator Robert F. Kennedy. While fellowships to individuals were a common and important philanthropic tool used by foundations to move fields forward, in this case they raised suspicion, resembling too closely political favors.“Travel And Study Awards For Members Of The Staff Of The Late Senator Robert F. Kennedy,” Ford Foundation records, Grants, Foundation Administered Project 06890762, Rockefeller Archive Center.

Bundy himself acknowledged that his testimony had not been well received.

“It must have been partly a matter of mood and I happened to be tired which was my fault. I have made a habit in later appearance to be damn careful to get down there early and get to bed because the most important single thing to be with congressmen is good humored.”Oral History Project, Ford Foundation records, Rockefeller Archive Center.

Even more disturbing abuses came to light when payments from two foundations to Supreme Court justices Abe Fortas and William O. Douglas were exposed. That the donors were co-conspirators in a stock manipulation case added to the grave indictment of foundations.

Testimony from the Wealthy

Other well-intentioned testimony misread optics and public perceptions of the wealthy. John D. Rockefeller 3rd, for example, was not a compelling advocate for foundations when he testified in all sincerity that although he had donated enough to charity to eliminate his tax liability (at the time there were no limits on the charitable deduction), he had voluntarily paid between five and ten percent to the government throughout the 1960s.

Members of the committee questioned whether wealthy individuals ought to be able to avoid their tax obligation by funding privately the public benefits they deemed necessary. That wealthy citizens could define the public good by their own lights, as well as opt out of taxation, seemed to smack of private government.

The House approved a bill in August 1969 that was harsher than foundation leaders had ever anticipated. While they could tolerate an absolute prohibition on self-dealing, they found the payout requirements and the proposal for a tax on foundation income excessive.

The Senate Works Through the Bill

After it moved to the Senate, the Finance Committee discussed even more threatening proposals, including a suggestion that would limit foundation tax exemptions to forty years (they could continue to exist after that, but would have to pay taxes).

Foundations found very few allies as the bill made its way through the Senate. But they began to work to coordinate their lobbying efforts and to gather better evidence about foundation contributions to American life. John D. Rockefeller 3rd initiated a private commission under the chairmanship of Peter G. Peterson to recommend less punitive policy proposals.

Nixon Signs the Bill into Law

House and Senate bills were reconciled in the fall and Richard Nixon signed the Tax Reform Act into law on December 30, 1969.

Although amended in important ways over the years, the 1969 provisions still provide the basic regulatory framework under which private foundation operate. For the first time, foundations were distinguished from public charities. Firstly, contributions to private foundations were accorded fewer tax advantages than donations to other types of charities. Secondly, mandatory payout levels were set and an excise tax was established, although over the years both were subsequently revised.

Finally, strict prohibitions on self-dealing were created along with provisions to limit foundation stock holdings and thus prevent controlling interests in businesses. Foundation electoral activities were also sharply restricted and foundation involvement in the legislative process was carefully delineated.

One of the Act’s biggest and most far-reaching reforms was its regulation of fellowships. In order to ensure that individual grants were awarded through fair and open procedures, foundations were obliged to establish formal guidelines for grants to individuals and to win advance IRS approval for the review processes.

Many foundation leaders at the time shared F. Emerson Andrews’ view that the Tax Reform Act of 1969 was “severely punitive” and saw it as a threat to their very existence. But in the ensuing decades, foundations have come to accept its provisions. Ironically, McGeorge Bundy, who had provoked such anger on Capitol Hill, urged foundations to work hard to make the new regulations effective so that they would become “permanent safeguards against abuse.”McGeorge Bundy, “President’s Review.” Ford Foundation Annual Report, 1969, p.xv.