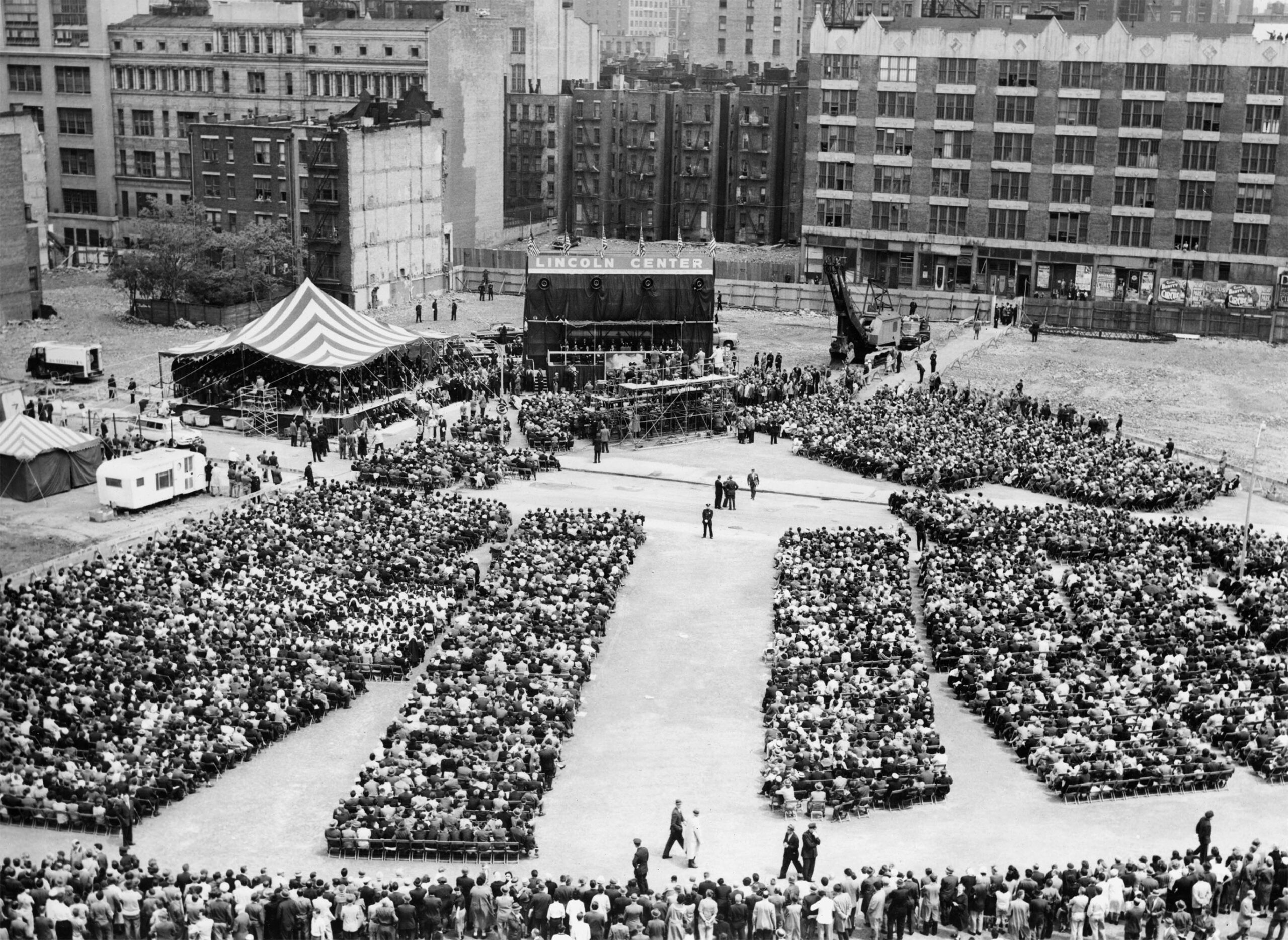 I am convinced that any good that is going to come out of planning for the city is going to foster the city’s diversity instead of obstructing it.

Historically, the Rockefeller Foundation (RF) has been known for its role in alleviating rural poverty through support for programs in public health and agriculture. From the beginning, however, the Foundation has also been concerned with urban issues. Some of the RF’s earliest grants were made to the Bureau of Municipal Research in New York and to institutions focused on the intersection of poverty and health in cities. In the years following World War II, the Foundation’s support helped shape the emerging academic fields of urban design and urban studies.

As Foundation staff attempted to shape a grants program addressing urban issues, they sometimes made grants to projects that stood in direct opposition to each other. Perhaps the starkest example of this was the Foundation’s simultaneous funding of Jane Jacobs’s pathbreaking 1961 book, The Death and Life and Great American Cities, and New York’s Lincoln Center for the Performing Arts — precisely the kind of urban project the book decried.

In its earliest years, the Foundation directed most of its work on cities in the United States to its home city of New York, through grants to the New York Association for Improving the Condition of the Poor, the Brooklyn Bureau of Charities, the American Social Hygiene Association, and the Bureau of Municipal Research. As was true in the Foundation’s rural work, program staff were concerned with addressing urban poverty’s root causes through disease prevention, hygienic education, and public health.

The New Deal and World War II prompted an exodus from farm to city in the United States. In the postwar era, the Foundation responded to this demographic shift with attention to urban design. In 1949, it funded the establishment of Columbia University’s Institute for Urban Land Use and Housing Studies with a $100,000 grant. Throughout the 1940s and 1950s, the Foundation helped establish the emerging academic discipline of urban design through grants to architecture schools at Harvard, Yale, the Massachusetts Institute of Technology, and the University of California. It significantly supported the University of Pennsylvania’s Institute for Urban Research, including the Institute’s publications of historical studies, a new academic degree program in urban criticism, and a famed 1958 conference on urban design. The conference’s high-profile participants included architects I.M. Pei and Louis Kahn, and architectural critics Lewis Mumford and Jane Jacobs.

Philanthropy played an important yet little-known role in Jacobs’s meteoric rise to fame. In the 1950s, as concerns about the conditions of postwar American cities grew, and the Rockefeller Foundation initiated efforts to build and shape the emerging field of urban design. In so doing, the Foundation encountered “Downtown is for People,” one of Jacobs’ most famous articles that foreshadowed her arguments in The Death and Life of Great American Cities. The piece was widely praised by leading academics and policymakers, prompting the Foundation to recognize the fiery author as a potential star in the field of urban studies.

Rockefeller Foundation grants in the 1950s often went to projects examining the economic aspects of city planning. These projects were funded simultaneously with the Foundation’s ongoing support for the field of public administration. Grantees reflecting this cluster of interests included the City Managers Association, the United States Conference of Mayors, and the American Society of Planning Officials. In 1960, drawing on a network of professional contacts built over almost 20 years, the Humanities program staff held a Foundation-sponsored luncheon focused on civic design, with guests Jane Jacobs, New York Times architecture critic Ada Louis Huxtable, the Vice President and Editor at Random House, author and urban scholar William H. Whyte, and the head of the Regional Plan Association.

Two midcentury initiatives have become permanently associated with the Rockefeller Foundation: the construction of New York’s Lincoln Center for the Performing Arts and Jane Jacobs’s path-breaking book, The Death and Life of Great American Cities. While these were projects on radically different scales and with opposing sensibilities, each has made a lasting impact on urban design theory. Both had their impetus in the 1950s, came to fruition in the early 1960s, and received major support from the Foundation (in Jacobs’s case, full funding).

The Construction of Lincoln Center

Lincoln Center’s construction was enabled by the Mayor’s Slum Clearance Committee, chaired by Parks Commissioner Robert Moses, which authorized the dismantling of a neighborhood known as Lincoln Square in order to clear the way for construction.

Modeled on palaces of high culture in European capitals, it brought together world-class companies in ballet, opera, classical music and theatre into an urban campus of white marble with clean, modernist lines. With buildings designed by leading architects of the day, such as Philip Johnson and Eero Saarinen, the center exuded modernist design ideals.

But the project was not without its controversies, first and foremost the legitimacy of Lincoln Square’s demolition. There was also the question of whether the Center would serve a broad public or simply New York’s elite. Several of the Foundation staff dispatched to serve on the Center’s steering committee objected to the enterprise. As the Foundation considered buy-in, President Dean Rusk questioned “the propriety of condemnation proceedings [of public property] for what may be, in effect, private purposes.”Dean Rusk to Chauncey Belknap, August 28, 1956. RAC, RG 1.2, series 200.R, box 364, folder 3290.

Rockefeller Foundation staff presence on the steering committee proved instrumental in at least assuring that extensive surveys were conducted on public transportation access and costs, as well as the Center’s potential impact on the surrounding fabric of businesses and residences. Nevertheless, when Lincoln Center opened its Philharmonic Hall in 1962 (and thereafter more buildings in phases through 1965), it was easier to sell the most expensive seats than the “affordable” ones.

Ironically, Jane Jacobs’s book, the other project receiving Foundation support at the same time as Lincoln Center, was written in defense of neighborhoods similar to Lincoln Square. In fact, in her 1958 article, “Downtown is for People,” she directly leveled her critical gaze Lincoln Center, a project she vehemently opposed.

Despite backing Jacobs’s scholarship, the Foundation did not always support the causes backed by Jacobs herself.

An editor at the magazine Architectural Forum, Jacobs caught the eye of the RF Humanities Division’s Associate Director, Chadbourne Gilpatric, who approved funding in 1958 for three years of writing and research on how “the design of cities might better serve urban life including cultural and humane values.”Grant-in-aid GA HUM 5862, September 8, 1958. RAC, RG 1.2, series 200, box 390, folder 3380. Working with Gilpatric, Jacobs became a regular advisor to the RF on urban design issues, hence her participation in the 1960 luncheon.

Jacobs advocated for mixed-use, human-scale streetscapes, looked at cities from the perspective of how people interact with each other in urban spaces, and argued persuasively against top-down urban renewal projects that did not take usability or human scale into account. The Death and Life of American Cities, published in 1961, met with critical acclaim and became an inflection point in urban theory and design. She became a nationally-recognized voice against modernist planning, which she criticized for sabotaging local neighborhoods and communities.

By the end of the 1960s, Jacobs had emerged as a well-known face of urban activism in New York City and across the country, highlighted by her defiant (and ultimately successful) efforts to block Robert Moses from building the Lower Manhattan Expressway, a proposed road that would have connected the Williamsburg and Manhattan Bridges to the Holland Tunnel, slicing through portions of Little Italy, SoHo, and the West Village.

Cities for the Next Millennium

Over the next three decades, many of Jacobs’s central concerns became central at the Foundation as well. Beginning in the 1990s, the RF funded programs addressing the complex of issues affecting city dwellers, particularly the poor. It helped launch Living Cities, Inc., a partnership of foundations, financial institutions, government agencies and local community development corporations focused on affordable housing and the economic redevelopment of inner-city neighborhoods in 23 cities across the United States. In 1991, it seeded the National Community Development Initiative and funded Social Science Research Council research on poverty. Other major funding in the 1990s went to the Poverty and Race Research Action Council and the Urban Institute. In 1996, the RF launched the Neighborhood Jobs Initiative and funded Democracy Roundtables examining the intersection of race, poverty, and access to resources such as health care, transportation, and education.