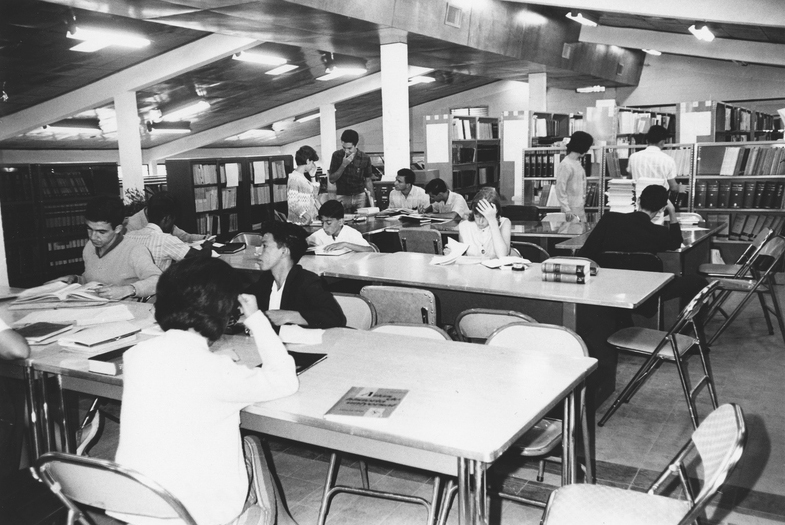 The UDP’s main objective was “to help create strong universities recognized as centers of excellence, largely staffed by indigenous scholars, and engaged in teaching and research relevant to national and regional needs.”Ralph K. Davidson, “Evolution of the Foundation’s University Development Program” November 1972, Rockefeller Archive Center (RAC), RG 3.2, Series 900, Box 63, Folder 350. Unlike previous RF university grants which were typically given to specific departments, UDP resources supported university-wide initiatives. Writing on problems and solutions for developing nations as early as 1956, Norman S. Buchanan, Director for the Social Sciences, noted that while assistance to specially selected university departments may have worked well in North America and Europe, the same approach would not suffice in the developing world. Instead, he argued for a “larger, more integrated attack on the university problem as a whole in place of the pin-pointed attack forward from a generally solid front.”Norman S. Buchanan, “A Note on RF Program for the Underdeveloped Areas” January 3, 1956, RAC, RG 3.2, Series 900, Box 63, Folder 349. Although this more general support may have been new, UDP grants still focused on key areas of RF interest, including agriculture, health and the social sciences, but new areas were also added, including support to confront systemic problems in university administration and finance.

Recipient universities were also expected to be actively engaged with their own development. The RF adapted a long-term approach to problems through the UDP, and the Foundation expected a matching commitment from foreign governments and university administrations. RF President J. George Harrar wrote of this relationship in 1961 that,

The Foundation’s role will be one directed toward helping the universities achieve their own aspirations in terms of national needs defined and directed by their own leadership. In each center, there must be strong desire on the part of the university authorities to progress toward the goals which they themselves have established and continuing effort on their part to generate increasing local support and to merit assistance from external sources.

In the UDP the RF saw an opportunity to create a niche for the organization in the post-colonial world. While other international organizations and national governments concentrated on the immediate needs of the developing world, the RF committed to projects that would reap benefits in the decades to come. As articulated in 1956:

RF’s resources do not allow it to compete with these large-scale programs of other agencies. But could it not perform a singularly important role in development if it were to bring a few universities in these countries to a level of excellence? If RF could do this the consequences for human well-being would be exceedingly large.

The RF selected schools to receive UDP funding by conducting surveys throughout the summer of 1961. RF officers surveyed universities in Southeast Asia, the Middle East, Africa and Latin America. Most of these institutions had received prior funding from the RF, a factor that weighed heavily in the Foundation’s decisions. Chief among the Foundation’s selection criteria were strong university leadership, a dynamic environment receptive to change, and an ability to function as a regional or national center capable of diffusing knowledge. Among the first universities chosen to participate in UDP were the: Universidad of Chile, Universidad del Valle in Colombia, University College in Nigeria, University College of East Africa, and the University of the Philippines. The program was later expanded to include additional universities.

“Risks for Good Cause”

Working in newly emerging or developing nations carried risks, and RF officers understood the potential pitfalls presented by the UDP. As described in the 1961 program proposal: “This risk is concerned principally with the possibility that changes in local political attitudes could make it difficult if not impossible for the Foundation to pursue one or another of these projects to its logical conclusion.”J. George Harrar, “Proposed University Development Program” November 13, 1961, RAC, RG 3.2, Series 900, Box 63, Folder 349. The Foundation’s experience in Zaire perfectly illustrated these concerns. Yet the RF forged ahead with the program, noting,

The officers are aware of this contingency, but believe that the Foundation should not ignore great opportunities for contributions to human welfare because of the risk involved. The Foundation has always been willing to accept risks for a good cause …

After final grants in Brazil and Indonesia in 1983, the EFD formally ended. In that year’s annual report, the RF expressed its belief that the goals of the program had been “largely realized” and went on to note that,

With the conclusion of the EFD program, the Foundation has completed a two decade contribution to the development of advanced educational capacity in several developing countries. Throughout the developing countries, excellent and mature universities now exist that no longer require the type of generalized institutional support that has been characteristic of the EFD program.

The RF continued funding education projects related to agriculture, health and population management before returning to higher education in 2000.

Partnership for Higher Education in Africa

The Partnership for Higher Education in Africa was established in 2000 as a collaborative effort between the Rockefeller, Ford, and John D. and Catherine T. MacArthur Foundations and the Carnegie Corporation. These organizations were later joined by the William and Flora Hewlett, Andrew W. Mellon and Kresge Foundations. Over its ten-year life-span the partnership members sought to foster change in institutions of higher learning located in African nations undergoing economic and political reforms at the start of the new millennium. These countries included Egypt, Ghana, Madagascar, Mozambique, Kenya, Nigeria, South Africa, Tanzania and Uganda.

The National University of Zaire (UNAZA)Zaire is now named Democratic Republic of the Congo. For the purposes of this essay Zaire is used since it refers to the name of the nation during the time period discussed. first received funds through the University Development Program in 1972. While the RF supported Lovanium University (one part of the eventual UNAZA) throughout the late 1950s and early 1960s, the civil unrest that followed decolonization prevented, for a time, further RF relations.

Early RF interest in Lovanium University was initially sparked by the school’s high admissions and academic standards, which were in part a result of the school’s well-established relationship with the Catholic University of Louvain in Belgium. RF funding provided support for a number of programs including nursing and library development.

By 1972 there were many more reasons to consider the school as a candidate for UDP funding. The RF believed that UNAZA offered opportunities in curriculum development and innovation because the school had only been created one year earlier, following a merger of Lovanium University in Kinshasa, the Free University of the Congo in Kisangani and the State University of the Congo in Lubumbashi. In the new organization each campus focused on a specialized discipline. The Faculty of Social Sciences was located in Lubumbashi, the Faculty of Agriculture at Yangambi and the Faculty of Medicine at Kinshasa. This radical reorganization economized resources and avoided duplication of services.

The potential for experimentation appealed to RF officers. RF trustees were also encouraged that the Zairian authorities had expressed an interest in external assistance, including RF involvement. RF officers believed that Zairians would make their own contributions and eventually sustain the university. A high concentration of natural resources, including mineral wealth, could create a strong Zairian economy. The RF also saw an opportunity for regional impact, since the university already drew students from neighboring African nations.“Elements in the Rationale for Selection of the National University of Zaire as an EFD University”, undated, Rockefeller Archive Center (RAC), RG 1.3, Series 709, Box 31, Folder 394.

The first UDP appropriation to the UNAZA allocated $500,000 for staff development. From the outset, however, RF officers harbored concerns about the UDP’s involvement. James S. Coleman and David Court, two RF officers who wrote a history of the program, noted that RF officers in agriculture and medicine expressed opposition to UNAZA receiving UDP funding. Medical staff did not see much promise in the Kinshasa program, while agriculturalists did not believe that Yangambi offered the best opportunities for research.

Indeed, the choice of Yangambi as the site of a new UNAZA campus was motivated by political rather than research interests. Zaire’s authoritarian leader, Mobutu, chose a site that had once been home to an agricultural station used by the Belgians for export tree crops, but with soil quality that proved incapable of growing Zaire’s much needed food crops. Yet Mobutu’s authority left no room for dissent.James S. Coleman and David Court, University Development in the Third World (New York: Pergamon Press, 1993) 127-135.

A number of other obstacles, many political in nature and most beyond the power of the RF, soon arose. As described in the 1978 program review:

A combination of circumstances and developments towards the end of 1975 led to further deterioration of the Zairian economy and as a consequence raised doubts about the survival of the Mobutu regime itself. The debacle of Zairian intervention in the Angolan war, the catastrophic drop from $1.50 to 55 cents a pound in the price of copper (which accounts for 70% of Zaire’s foreign exchange earnings), the indefinite closure of the Benguela Railway, the cumulative effects of the disastrous economic policies of the two prior years aimed at economic independence, the rapid increase in indebtedness which threatened and ultimately did bring Zaire to near bankruptcy (globally the Zairian public debt reached per capita the highest level of indebtedness in the world), the continuing steep rise in the price of imported fuel, and the mounting proportion of scare foreign exchange required for the importation of basic foodstuffs due to a continuing decline in agricultural production — all transpiring within a context of a global recession – combined to plunge Zaire into a state of economic, social and political affairs from which many analysts believed salvation was impossible.[4]

All of these conditions directly impacted UNAZA. University administration and financial oversight were basically non-existent. Faculty found it increasingly difficult to earn a living and wanted for basic resources. Morale plunged without pay or academic support. Libraries languished with minimal resources. In 1975 an RF report noted that

Anyone familiar with Zairian higher educational institutions is struck (‘shocked’ might be more appropriate) by the abysmal state of the libraries in terms of physical facilities, available books, subscription to journals, and the sheer quality of the management of what pass for libraries.

Money that the Mobutu government promised for infrastructure never materialized, including the construction of roads to the remote station at Yangambi.

Yet the RF did realize some modest success. The Center for Interdisciplinary Research on the Development of Education (CRIDE) and the Institute for Social and Economic Research (IRES) were established with RF funding and organization assistance. The Foundation also supported staff development through individual fellowships.