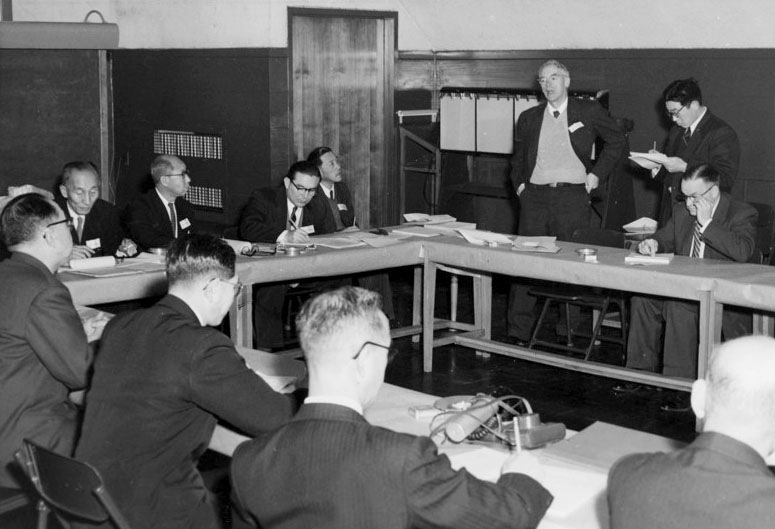 The SSRC brought together the main social science societies active at that time in the fields of political science, economics, sociology, history, statistics, psychology, and anthropology. As noted in the Rockefeller Foundation’s (RF) 1929 Annual Report,

SSRC staff members did not conduct their own research; instead they assembled research planning committees consisting of prominent scholars from the member societies. In some cases, these members would develop research agendas; in others, SSRC staff members would share research themes with relevant academic departments and journals to attract additional researchers to apply for project or fellowship support. The results would be disseminated to the academic community, the public and policy makers. With this operational plan and a small staff, and with support first from LSRM and then the RF (along with other foundations such as Russell Sage and Carnegie Corporation of New York), SSRC rapidly became a operating arm of the foundation world similar to the role played in science by the National Research Council and in the humanities by the American Council for Learned Societies.

Following the 1928 merger of the LSRM and the RF, the SSRC became a continuing partner of the Foundation’s newly formed Division of Social Sciences –a partnership that persisted with the RF even after the Division itself was eliminated. The SSRC promoted new approaches and new fields of research, and the Foundation provided support for SSRC’s research planning activities, fellowships, and grants for particular research projects. Initially these fellowships and grants were awarded only to postdoctoral and senior scholars, but in later years pre-dissertation and dissertation research was also supported.

As the Foundation changed its focus in 1933-34 from wide-ranging support of the social sciences to a more targeted set of fields, the SSRC promoted the fields supported by the RF. In the following decades, joint RF-SSRC projects focused on international relations, economic history, public administration, economic relief (this committee work contributed to shaping Social Security), the social implications of atomic energy, preventive medicine, and methods of social surveys and polling.

Gradually, as other social science think tanks became stronger and the fields of RF focus in the 1960’s became even more specialized in agriculture, population studies and university development, the Foundation’s collaboration with SSRC focused on fellowships to ensure the availability of well-trained social scientists able to conduct research on these themes. But a diverse array of SSRC research committees soon re-emerged in the Foundation’s portfolio in the 1970s, 1980s and 1990s, examining issues that included nuclear security, land mines, human sexuality, African higher education, African art and museums, and the causes of persistent poverty in urban areas.

Building the Field of International Relations in the U.S.

One of the early major SSRC committees supported by the Foundation was the program on research in international relations, starting in April 1931 with a $31,250 grant for two and a half years. This committee, like others, aimed to develop interdisciplinary research–in this case, to address priority problems of current international affairs. Support for this research committee, directed by James T. Shotwell of Columbia University, complemented the RF’s support for the Council on Foreign Relations and the Foreign Policy Association. The SSRC committee’s aim was to identify key research themes and coordinate international relations departments at colleges and universities, particularly those aimed at widening the range of social scientists engaged in such research.

Related programs followed after World War II. The destructive potential of the atomic bomb, for example, led the RF not only to continue to focus on the bomb’s effect on political relationships between the United States and Europe but also to work with SSRC on the social and foreign policy implications of atomic energy. In the Foundation’s 1945 Annual Report, President Raymond Fosdick wrote with passion about the RF-supported scientific search for truth that had led to the development of the bomb but had also “brought our civilization to the edge of the abyss…”The Rockefeller Foundation, Annual Report 1945 (New York: The Rockefeller Foundation, 1945) 6.

The Foundation agreed to support, under the committee’s auspices, a study undertaken by a team brought together by Cornell University to assess American public opinion prior to and after a U.S. Navy experiment in above-ground atomic testing at Bikini Atoll in the South Pacific. Polling revealed the significant fact that both before and after the testing, the public strongly favored the continuing production of the bomb but also wanted international controls on all nations, including the United States, so that the bomb could never be used.

A Focus on American Social and Economic Conditions

From 1984 to 1992 the Foundation funded an SSRC committee on persistent urban poverty. Over a period of five years, the committee selected a cohort of young scholars mentored by the committee’s senior scholars to examine workforce issues, the social dimensions of drugs and crime, the relationships of family and neighborhood, and the nature of the underclass. As noted in the 1992 Annual Report, the committee results created “an urban underclass database containing over 6,000 social, economic, demographic and health indicators…used already in preparing a major report to the president on national urban policy.”The Rockefeller Foundation, Annual Report 1992 (New York: The Rockefeller Foundation, 1992) 42.

In 1951 the Foundation recognized the importance of the SSRC’s work with a special capital fund grant of $1.5 million (bringing the total of RF and LSRM investment in the SSRC to $10 million). Through the SSRC, the Foundation today supports scholars and research that inform public debate and contribute to public policy. Foundation staff comments from a program review in 1933 continue to be an apt description of this long-term relationship:

The Social Science Research Council is constantly assisting the Foundation’s program in the social sciences in ways which are of major importance. Did the council not exist, some effort would almost certainly be in order to create such a body.Agenda for Special Trustees meeting, Social sciences-Program and Policy: Past Program and Proposed Future Program, April 11, Rockefeller Archives Center (RAC), RG 3.1, Series 910, Box 2, Folder 12.

By: Patricia Rosenfield
Patricia L. Rosenfield is president of the Herbert and Audrey Rosenfield Fund and has worked as a Senior Fellow and consultant at the Rockefeller Archive Center since 2011. With research interests in the history, practice, and ethics of philanthropy, and the practice of interdisciplinary team science, Dr. Rosenfield is the author of A World of Giving: Carnegie Corporation of New York, A Century of International Grantmaking (2014), among many other publications. Her career has spanned scholarship and practice, with service at Carnegie Corporation of New York, the World Health Organization, and Resources for the Future. She holds a PhD from Johns Hopkins University and Honorary Doctorate in Social Sciences from Mahidol University, Bangkok, Thailand, and was a Rockefeller Foundation Postdoctoral Fellow in Environmental Affairs.