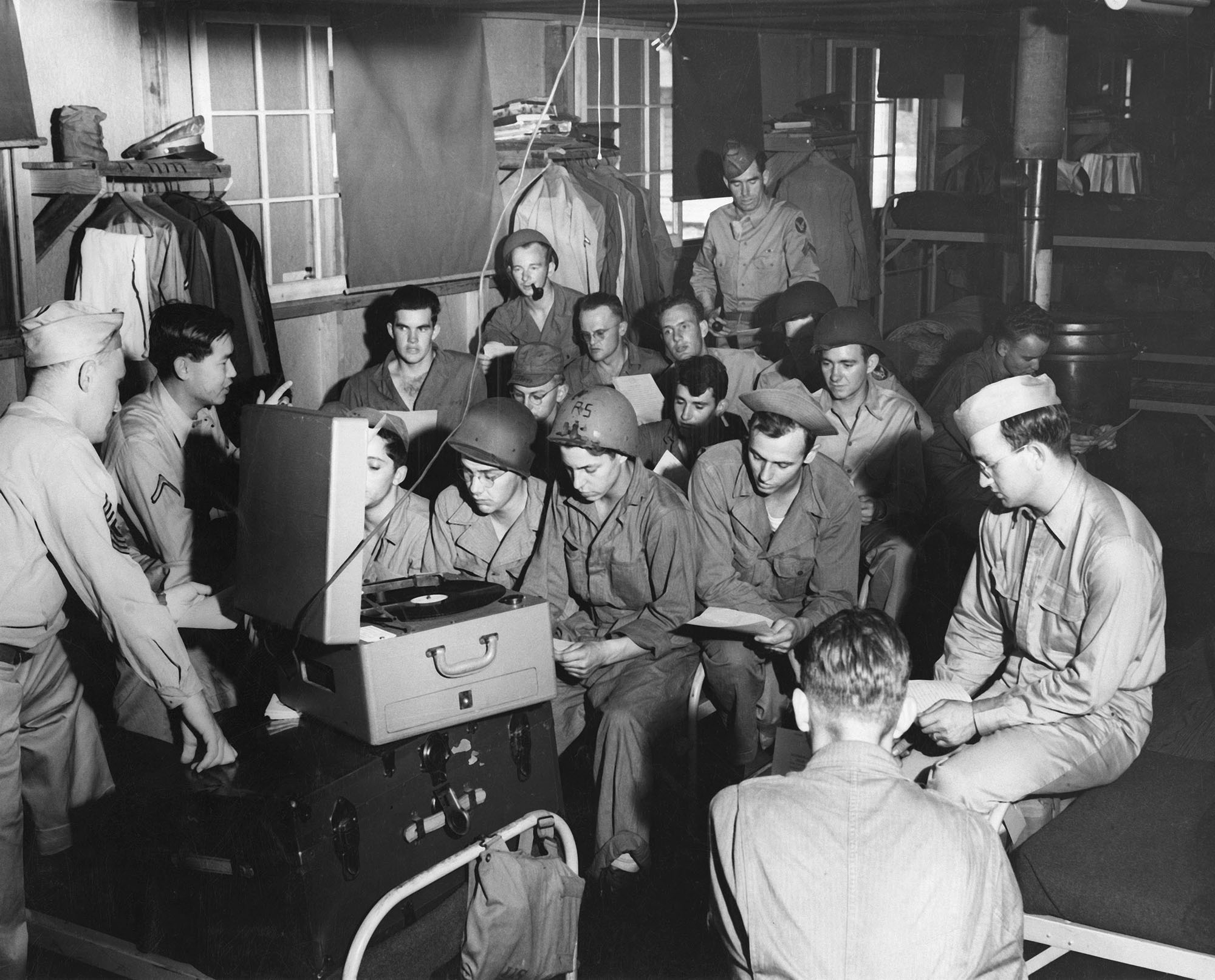 By the end of World War I, the Rockefeller Foundation had found its footing as a philanthropic organization devoted to long-term change, and in doing so it had resolved never again to act as a relief organization. In the interwar years the Foundation had set an agenda that included support for large public health campaigns, medical education, higher education and scientific research. During this period some of the Rockefeller Foundation’s strongest networks were built, connecting the major universities of Europe.

However, as fascist governments steadily came to power in some European nations, these academic institutions found themselves threatened by anti-intellectual environments that suppressed research in many areas and dismissed scholars for their religion or for their political affiliations. Although the Rockefeller Foundation was no longer in the business of providing relief, World War II inevitably affected the Foundation’s operations and grant-making decisions, both during and after the war.

Forced to respond to this new crisis, the Rockefeller Foundation created the Refugee Scholar Program in 1933 (first called the Special Research Aid Fund for Deposed Scholars). This program helped to relocate European intellectuals whose employment and lives had been threatened because of their religion or ideology. By 1940 this program operated as an emergency relocation program, helping to save the lives of hundreds of scholars, most of them Jewish.

Trying to Work “Above the Noise and Quarreling”

In the years leading up to the outbreak of World War II, Rockefeller Foundation officers remained confident even as the international situation looked increasingly bleak. They emphasized their faith in science as a force for good and believed that the Foundation’s commitment to free inquiry would transcend what they viewed as international squabbling, despite the rise of totalitarian regimes in Germany, Italy, Russia, and Japan.

In 1937, Rockefeller Foundation President Raymond Fosdick reaffirmed the Foundation’s commitment to remain as neutral as possible:

[W]e have tried to keep the level of our work above the noise and quarreling. . . [I]n an era of conflict and chaos our work is being maintained on a plane where there are no national or sectarian lines.

On the eve of World War II, the challenges of remaining “above the noise and quarreling” became increasingly evident.

The Outbreak of War in Europe

When war was declared in Europe in September 1939, RF staff had to confront both the immediate practical problems and long-term challenges facing the Foundation. First and foremost, they had to think about their staff in Europe. There were many administrative questions concerning the safety and journey home of the 66 staff members, research fellows, and their families still in Europe. There were also the grants themselves: in 1939 the Foundation had 110 separate projects in 22 European countries, with about $4 million in appropriations at stake.The Rockefeller Foundation, Annual Report 1939 (New York: The Rockefeller Foundation, 1939), 9.

Remarkably, Foundation staff were also beginning to think about the Foundation’s peace-time role. They recognized that it was essential to look toward a time when peace would return to Europe and Asia, and contemplate future needs for reconstruction and rehabilitation.

“To Keep Burning the Candle of the Intellectual Life”

After the Foundation’s experience in World War I, Fosdick hoped that the Rockefeller Foundation would not become a relief organization: he believed that the RF’s wartime role was “to keep burning the candle of the intellectual life,” and “to make available the best of scientific research in the alleviation of human misery.” This, he argued, would be “a more practicable service for us to render than to try to feed a Belgium or a Poland.”Letter from Raymond B. Fosdick to Selskar M. Gunn, September 7, 1939, RG 1.1, Series 700, Box 14, Folder 105.

Fosdick sought to avoid projects that would aid either side in the war effort, believing that

…detachment and objectivity are absolutely necessary if we are going to maintain ourselves as an international force for the future.

Yet Fosdick saw that opportunities were rapidly being foreclosed in Europe and anticipated, correctly, that more work could be done in the United States and Latin America. (This shift in focus would lead to the creation of the Mexican Agricultural Program in 1943, which is today seen as the origin of the global agricultural transformation known as the “Green Revolution.”)

In December 1939, Rockefeller Foundation trustees ratified a wartime program that sought to maintain contacts with European scientists and universities, and use members of its International Health Division (IHD) to monitor war-related health problems. It also extended the Rockefeller Foundation’s efforts to rescue scholars begun in 1933.“A War Time Program for the Foundation in Europe,” December 5-6, 1939, Rockefeller Archive Center (RAC), RG 3, Series 900, Box 26, Folder 216. The wartime program would expand dramatically with the United States’ entry into the war in December 1941. Despite earlier attempts to remain neutral, the RF’s appropriations increasingly supported the Allied war effort.

In a 1943 brochure, The War Work of the Rockefeller Foundation, Fosdick acknowledged that although the Foundation’s “main concern is not with immediate things or with the emergencies of the moment . . . We are all of us in the war and it is idle to pretend that business can proceed as usual.” The Foundation solved this dilemma by pursuing projects that addressed the emergency needs of the moment, but with “some constructive reference to the world after the war.” This focus on the “far target” was evident in several of the Foundation’s wartime grants.Raymond B. Fosdick, “The War Work of the Rockefeller Foundation: Making the Present Serve the Future” (New York: Rockefeller Foundation, 1943), RG 3, Series 900, Box 26, Folder 217.

In 1940, the Rockefeller Foundation Health Commission was created to conduct wartime public health work under the direction of the International Health Division. By the end of 1942, the Commission had supplied to Allied troops more than 14.5 million doses of the Yellow Fever vaccine developed by the Foundation. It also conducted a study of wartime nutritional deficiencies in Spain, France, and England, and studies of the flu, scarlet fever, malaria, and typhus. The Medical Sciences Division, recognizing the prevalence of war-related brain injuries, funded brain surgery research at the University of Edinburgh.

The Rockefeller Foundation’s Humanities Division financed the microfilming of the vast collection of historically significant documents and drawings in the King’s Library at Windsor Castle that were threatened by bombing campaigns over England.

Grants were made to the American Council of Learned Societies (ACLS) to microfilm historically significant books and documents in the British Museum, Oxford and Cambridge libraries, and London’s Public Record Office, as well as to create maps of European libraries, museums, and churches, in an effort to avoid bombing culturally significant places. The ACLS also received funding to provide language instruction in Japanese, Chinese, and Russian at American universities.

The Humanities Division supported several other efforts, including an American Library Association program to buy or microfilm scholarly journals for distribution in war-torn countries, and wartime communications studies in radio and propaganda.

The Rockefeller Foundation’s Social Sciences Division supported several studies related to “the problems of peace and postwar reconstruction,” as well as a study of Japanese American incarceration on America’s West Coast.

The Foundation also mobilized its research and intellectual networks to assist the federal government. In 1942 it collaborated with Carnegie Corporation of New York to form the Ethnogeographic Board, a war-time board that sought to link scientific and educational organizations with the government’s military and civilian war agencies. Within a few months, the Board had created a “card roster” of more than 5,000 specialists with knowledge of particular countries and regions. These experts were soon working with fourteen government agencies, including the Army and Navy intelligence services.

A Crisis of Conscious for Rockefeller Foundation Staff

The experience of World War II devastated Rockefeller Foundation staff. They witnessed the destruction of Foundation-funded research facilities and the misappropriation of scientific research toward destructive ends (including, most devastatingly, the atomic bomb), as well as the loss of countless human lives and talent. Fosdick articulated this disillusionment most clearly:

The pursuit of truth has at last led us to the tools by which we can ourselves become the destroyers of our own institutions and all the bright hopes of the race. . . . [W]hat are we to do–curb our science, or cling to the pursuit of truth and run the risk of returning our society to barbarism?

When the Foundation emerged from the conflict in 1945, its leaders and staff were left with the difficult task of finding ways to preserve, reclaim, and build on the legacy they had established before the war. The Foundation contributed to postwar reconstruction efforts, both in Allied and former enemy countries, but its staff no longer looked to European institutions as a model for future work.

Rockefeller Foundation leaders no longer placed their faith in science to remedy global ills. They mourned the loss of its academic investments on the continent, especially the Foundation-supported scientific research. Instead, Rockefeller Foundation strategy shifted focus to Asia and Latin America, where they hoped to employ much more targeted, cautious applications of science toward humane ends.