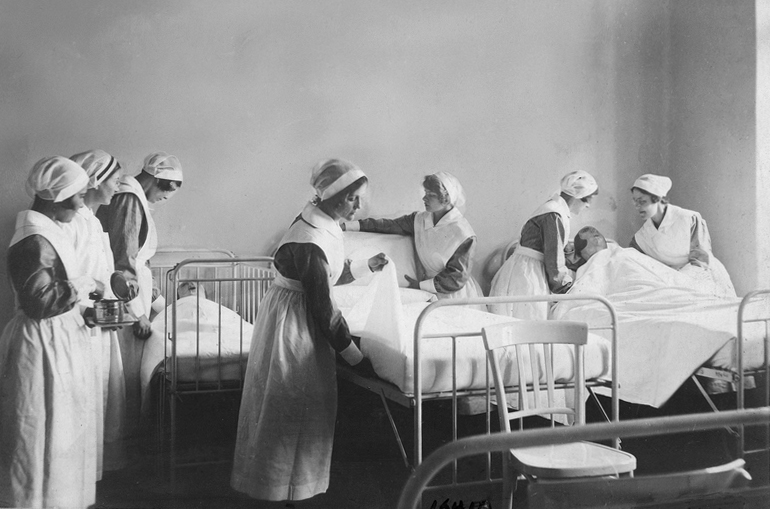 Three formidable women championed the reform of nursing education. Mary Beard, Elizabeth Crowell and Mary Tennant advocated for the female-dominated field of nursing, and they worked tirelessly to convince the male-dominated RF of the value of an investment in the field. Mary Beard, Associate Director of the International Health Division (IHD), advocated for the presence of a regular nursing representative at the RF administrative offices. Beard wrote to Raymond Fosdick,

While the official program in nursing education began in 1924, comprehensive consideration of the issue of nursing education began in 1918. That year an RF-sponsored conference focused specifically on the issue of public health nursing education in the United States. This meeting resulted in the formation of the Committee for Study of Public Health Nursing to survey the state of the field. The scope of the study was later expanded to include hospital nursing as well. The resulting Goldmark Report, named for the committee’s Executive Secretary, Josephine Goldmark, advocated university education for nurses and argued that public health nursing must include training in basic hospital nursing.

The recommendations of the Goldmark Report proved crucial in subsequent RF funding decisions. In the United States, the Yale School of Nursing became the first American school to receive funding to improve the education of public health nurses, while in Canada the influential nursing program at the University of Toronto became a model program and an important center of training. In 1921 Elizabeth Crowell was charged with conducting an extensive study of nursing in Europe. As a result of her findings, the RF funded the creation of a number of modern nursing schools during the interwar period. Following World War II many of these European schools fell under Communist rule, and the RF was forced to sever its ties with them. In South America the IHD-funded Anna Nery School of Nursing in Rio de Janeiro opened in 1923, signaling an increase in spending on that continent.

The increased funding of nursing education helped to raise the standards of the profession by formalizing educational requirements and combining training in the wards with classroom instruction. Nursing schools were also able to attract a growing number of women from the middle class, which helped to solidify the status of nursing as a respectable profession.

RF appropriations for nursing focused on several activities, including:

Of these expenses, the fellowship program had the largest global impact. Almost 800 nursing fellows from 70 countries studied in Canada and the United States. These fellows were selected for their skills, as well as their future potential as leaders. Nurses who accepted fellowships were expected to return to their home countries and apply their new knowledge of the fields of nursing, public health and administration. A high percentage of RF fellows fulfilled these expectations, becoming nursing leaders in their own countries, and in some instances even starting their own nursing schools or public health programs.

Control of the RF nursing program changed hands several times during its existence. The initial program, designed in part by Crowell, was administered by the Division of Studies, which Crowell joined in 1923. Two years later the program was transferred to the Division of Medical Education and the IHD. In 1928 the Division of Medical Education took the program over entirely, but four years later it was transferred back to the IHD. Mary Tennant administered the nursing program in both of these divisions during her 27-year career with the RF.

She [a public health nurse] is the link between the other workers and the home and family. She carries the message of health to the ultimate unit, the individual. She must know the preventative and social aspects of medicine and nursing as well as the curative side. Her chief role is that of teacher. Standards of qualifications for a nurse must be of the same high order as for other professions. In many countries nurses are looked upon as full partners of doctors.

Financial support from the RF trained better nurses, who proved vitally important to RF health initiatives. This investment in nursing education also led to an increased amount of respect for the profession. Once considered a career only for underprivileged women, nursing gained real status as a respectable profession for all women due in large part to RF involvement.

Institutional Case Study: Nursing at the University of Toronto

In a 1925 internal memorandum Edwin R. Embree, Director of the Division of Studies, wrote to President George Vincent regarding RF policy toward nursing education. In that correspondence Embree argued that funding should be reserved for “the occasional school that is about to make a real contribution by its influence and by the leaders and teachers of other schools which it may turn out.” Embree called these schools “light houses.”Memorandum from Edwin R. Embree to George Vincent, August 29, 1925, Rockefeller Archive Center (RAC), RG 3, Series 906, Box 2, Folder 15. From its opening in 1933, the School of Nursing at the University of Toronto became the RF’s pre-eminent lighthouse, developing a world-class reputation for its innovative teaching and programs.

Building a “Lighthouse” for Nursing Education

The establishment of the School of Nursing at the University of Toronto and its early successes can be attributed to Kathleen Russell, the school’s first Director, and Mary Beard, Associate Director of the International Health Division (IHD). Russell was appointed Director of the University of Toronto’s Public Health Nursing Program in 1920. She quickly began to lobby for an independent yet affiliated nursing school with control over its own finances, administration, standards and curriculum. The RF, and Mary Beard in particular, proved instrumental in helping to achieve this goal.

The establishment of the School of Nursing built on an existing relationship between the RF and the University of Toronto. The university regularly accepted RF-sponsored international nursing fellows into its public health program, while the RF offered regular financial support to the University’s Faculty of Medicine and its School of Hygiene. These existing relationships gave Toronto an advantage over other institutions vying for RF funding to establish a school of nursing.

In 1928 Russell contacted Beard to gauge RF interest in helping to develop a nursing school at the University of Toronto. Russell proposed a school that would prepare nurses and teachers for both public health and hospital work. Her proposal also included plans for courses in health administration and graduate studies in nursing. Beard initially advised Russell to hold off on her proposal while she sold RF trustees on the idea. RF trustees accepted the proposal two years later, although changes in the government in Ontario and funding issues delayed the school’s opening until 1933.

The Toronto School is exerting a beneficial influence not only on the training schools in the City of Toronto but also on those throughout Canada and in foreign countries.

A New Kind of Nursing Education

Innovation characterized the School of Nursing from its inception. The school was the first to offer nursing students a combined degree in both hospital and public health nursing. In the school’s first annual report from 1933-34, Russell reported that:

The new work has been done with greater ease than had been thought possible and, further, more has been accomplished in this first year of training than we had hoped for at the outset. These results are evidence of the fact that the principles underlying the experimental work are acceptable to the nursing, medical, and hospital authorities with whom we are working.Annual Report of the School of Nursing at the University of Toronto, 1933-34, RAC, RG 1.1, Series 427C, Box 12, Folder 97.

The quality of applicants also showed promise from the very beginning. Writing to Beard in 1933, Russell noted,

The best news of all is that exceedingly good applications are coming in. It seems we shall have no difficulty about enrollment: in fact the difficulty now is in making the selection.

The School of Nursing at the University of Toronto hosted 39% of all RF international nursing fellows – more than any other nursing program.John Farley, To Cast Out Disease (New York: Oxford University Press, 2004) 230. Applicants were chosen from all over the globe based on a competitive system of examinations and interviews designed to gauge academic potential and leadership skills. The university also hosted a significant number of African-American students from the United States — students who might otherwise have been denied similar educational opportunities. The fellowship program was also instrumental in creating social and professional networks that helped to connect and sustain the field and to shape outstanding careers.