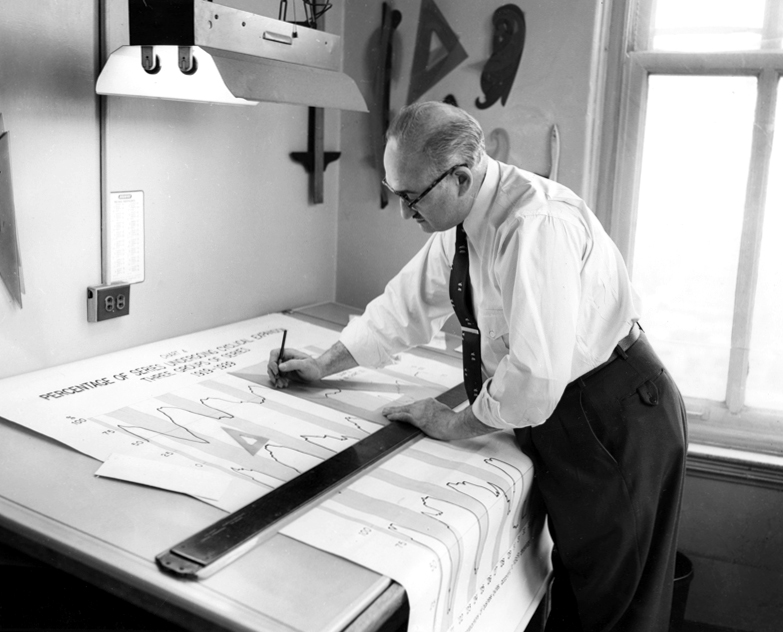 The Rockefeller Foundation (RF) did not embark on a formal program in the social sciences until it took over the programs of the Laura Spelman Rockefeller Memorial (LSRM) in 1928. Early efforts to examine economic, social, and labor issues and to create a Division of Industrial Relations after the tragedy at Ludlow, Colorado, were criticized by the Walsh Commission. Internal discussions about establishing an Institute for Economic Research, modeled on the Institute for Medical Research and the Institute for Government Research, did not come to fruition during the Foundation’s early years. However, the RF was ultimately compelled to confront the most pressing economic challenges of the Great Depression.

The first director of the RF’s newly created Division of the Social Sciences, Edmund E. Day, was a Harvard-trained economist. The convergence of the stock market crash, a global economic downturn, and catastrophic levels of unemployment highlighted the need to achieve economic stabilization and recovery. Foundation staff knew that better data was required to understand and analyze the business cycle; better data could also provide answers to questions about unemployment and income security and lead to practical remedies to propel the economy out of the Depression.

A cluster of independent and university research centers began to receive significant Foundation support in the 1930s. The National Bureau of Economic Research (NBER), which had been a major recipient of LSRM funding throughout the 1920s, received over $5 million during the ensuing two decades. NBER’s statistical work on business cycles, national income, wealth distribution, unemployment, and interest rates offered essential insights into the causes of the Depression and the potential paths out of it.

From Economic Stabilization to Social Security

“Economic stabilization” was the watchword of the RF program during the early years of the Depression. But in 1935 the programs were described under a new rubric: “social security.” That year-the same year in which Congress passed and President Franklin Roosevelt signed the Social Security Act-Foundation trustees approved a program with two objectives. It would continue to support research to describe and measure “cyclical and structural change” in the economy. It would also explore the “development of more adequate protection against the main hazards that confront the individual, such as sickness, accident, old age dependency, and unemployment through improved provision for social insurance and organized relief.”The Rockefeller Foundation, Annual Report 1935 (New York: The Rockefeller Foundation, 1935) 210.

The RF gave $225,000 to the Social Science Research Council (SSRC) to establish a Committee on Social Security. This Committee sought to develop research personnel capable of gathering data about the sources of insecurity in the economy and helping the federal government administer its new social programs. Elsewhere in the U.S., the RF supported projects to study unemployment and to test strategies for improving the job market.

Because the Depression was global in scope, and because the RF had always been a global foundation, it supported a number of European research centers, often bringing American-style data-gathering to other academic cultures. Among the most prominent of the new European institutions was the Institut scientifique de recherches économiques et sociales (ISRES), headed by Charles Rist, a distinguished economist and Banque de France governor who had advised LSRM staff members since the 1920s.

After years of negotiation, the RF made a seven-year, $350,000 commitment to ISRES. The institute focused on business cycle research and topics in industrial organization and agricultural development. In Great Britain in 1937, the RF and a small group of foundations established the National Institute of Economic and Social Research, which conducted its own studies and also served as a funding conduit for university-based research. It examined national income, output, and distribution before turning to more urgent war-related studies.

Many other European institutions were enlisted in the effort to gather data and to understand the causes of the economic crisis, including the Dutch Economic Institute; the Institute for International Economics and Maritime Trade in Kiel, Germany; the Austrian Institute for Trade Cycle Research; the Financial Section and Economic Intelligence Service of the League of Nations; the University of Oslo’s Institute of Economics, and the Department of Applied Economics at the University of Cambridge. Outside of Europe, the Foundation also established an Institute of Economics at Nankai University in China.

While much of the Foundation’s economic agenda throughout the 1930s focused on building research centers and supporting practical projects to stabilize the global economy, new leadership in the Division of the Social Sciences brought a more expansive perspective. Joseph H. Willits, Dean of the Wharton School of Business and executive director of the NBER as well as an RF grantee, arrived at the RF in 1939 to direct the Division of the Social Sciences. He told the trustees in 1940,

If we really wish to understand the consequences of policy or the causes of disaster in social affairs, we must adjust our efforts to the grandeur of the problems…It is especially true at a time of historical crisis in the world that we need to re-examine the facts of economic and social causation which led to the crisis.Joseph H. Willits, 1940, Rockefeller Archive Center (RAC), RG 1.1, Series 200S, Box 396, Folder 4700.

Economic history seemed to offer one means of moving beyond fact-gathering. Willits organized a meeting of economic historians and economists in 1940, and within a few months a research field with a new scholarly association and journal had emerged. Foundation support for work in economic history endured into the mid-1950s.

Projects funded through the SSRC examined the history of economic thought and looked at the history of wages and prices in European countries. The search for a grand narrative of American economic development led the Foundation to fund the Harvard business historian Arthur Cole’s work and his Center for Entrepreneurial History, which attracted senior scholars including Thomas Cochran, Leland Jenks, and Joseph Schumpeter.

The World after the War

With the end of World War II, the Foundation renewed its support for European institutes whose work had been interrupted by the war and whose agendas necessarily turned to questions of economic reconstruction. International economic issues also gained greater importance in the post-war years. However, as the Social Sciences Division’s mandate evolved in the post-war era, area studies would begin to receive far greater funding than the work in economics.

In 1952 a $2 million “terminal capital grant” was made to the NBER. Support for economics as a discipline would gradually give way to projects for managing national economies. A $310,000 grant from the RF to the Brookings Institution in 1954 funded a study of the Federal Reserve System. The RF supported other research centers examining trade policy and foreign exchange, conducting surveys of consumer and business sentiment, collecting data on national income and employment, and improving economic forecasting.

The Quest for Economic Development

Training remained a central feature of RF programs. A program to train economists from less developed countries began in the mid-1950s at the Economic Development Institute of the International Bank for Reconstruction and Development. As training programs emerged in multiple disciplines, RF staff noted that

[The problems of economic development] will be best analyzed and dealt with by well-trained social scientists from their own populations. Consequently, a major point of program emphasis is to try to train more social scientists from these areas up to the highest levels of professional competence and to assist in the building up of strong teaching and research centers in these countries.The Rockefeller Foundation, Annual Report 1956 (New York: The Rockefeller Foundation, 1956) 189.

The Foundation changed both structurally and strategically in the early 1960s. Rather than supporting programs based in academic disciplines, the RF identified five areas of particular focus – hunger, population, equal opportunity, cultural development, and centers of learning – around which funding and support would be organized. As a result, economics became a component of other programs of the Foundation.

Economists would serve the Equal Opportunity program as a tool to study impoverished urban neighborhoods when the Foundation began to focus on the inner city in 1969. Economists would be asked to study urban poverty, community development, and housing into the 1980s and 1990s, working with the National Community Development Initiative and the Corporation for Supportive Housing. Economics would be one among many tools in the Living Cities program as it looked toward the redevelopment of urban neighborhoods.

The Foundation, in partnership with the Ford Foundation, the International Development Research Centre, and leading agricultural institutions in Colombia, pioneered the development of farming systems research, which borrowed methodologies and theories from economics and anthropology. Economics was introduced into the effort to build the discipline of clinical epidemiology in the 1980s through the Foundation-sponsored International Clinical Epidemiology Network. Economics was an essential component of the RF’s influential report, Good Health at Low Cost, which dispelled the myth that economic growth was essential for improving a population’s health.

Over nearly a full century of activity in the field of economics, the RF has initiated new research centers and training programs around the world and helped make economics an integral tool of policy analysis.