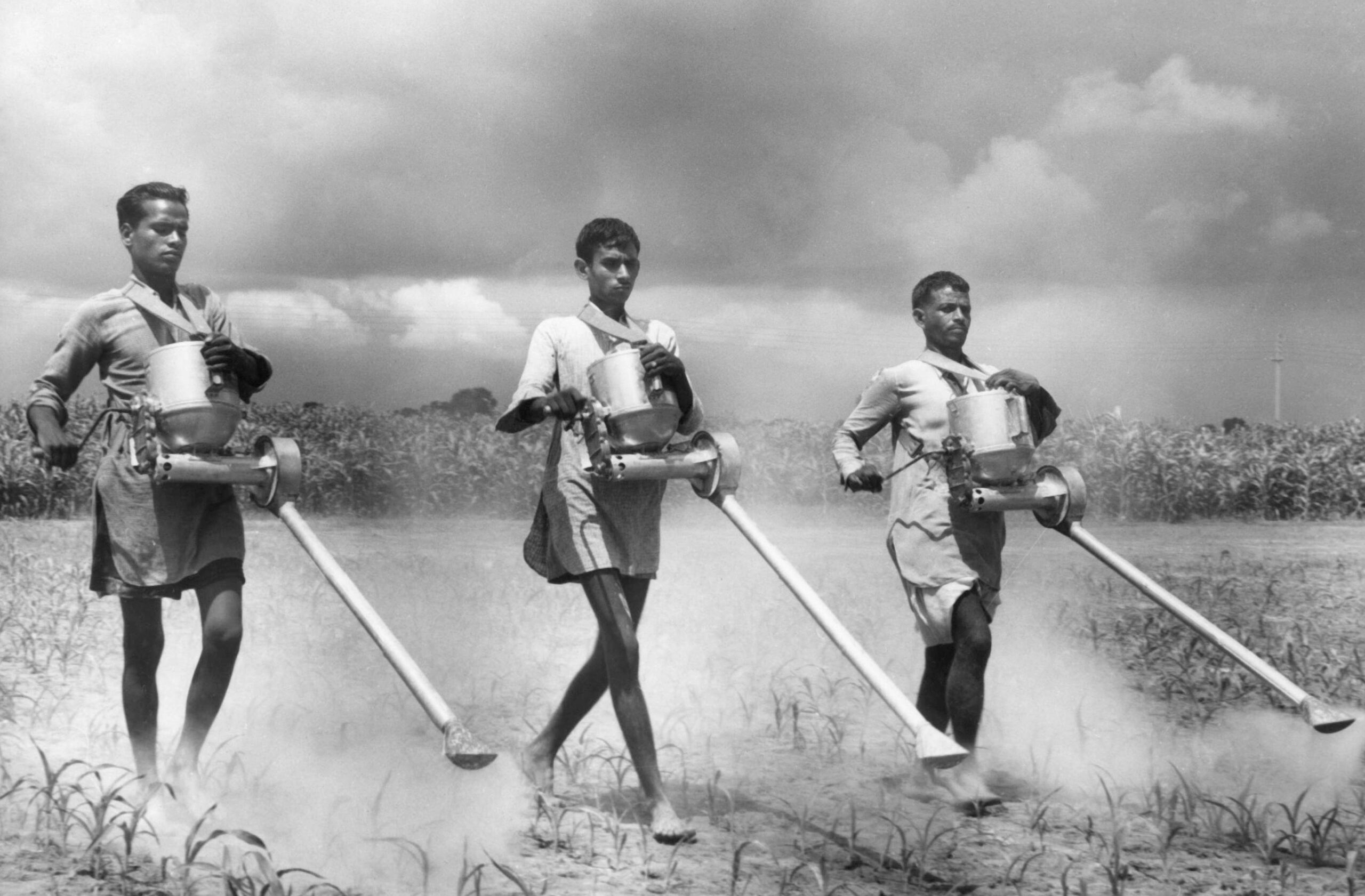 The agriculture program that the Rockefeller Foundation operated in Mexico beginning in 1943 had been designed to transfer to other regions around the world. India was not the first country to take up the new seeds and methods developed in Mexico, but the story of India’s adoption of them is dramatic. At that time, in the mid-1960s, it drew global attention to the innovative practices that came to be called a “Green Revolution.” As a newly independent, democratic nation (1947), India played an outsized role in Cold War geopolitical struggles, and exemplified concerns about resources, population, and modernization.

The problem of the ratio of developed resources to population is one of the basic problems of all unindustrialized countries. Moreover, India is of central strategic importance. If RF could make a real contribution toward raising this ratio in countries such as India… it would serve its times fundamentally.

In the early 1950s, a newly independent India presented a potential area of expansion for the agriculture initiatives of the Rockefeller Foundation (RF). As a democratic state, it held particular geopolitical importance as a stronghold against Communism in Southeast Asia. At the same time, it faced special challenges as it emerged from British rule. After India achieved independence, it was plunged into years of political turmoil. Muslim Pakistan violently broke away. The Indian central government struggled to unite disparate regions and to develop a viable economy. With a rapidly expanding population, India’s recurrent droughts left millions in peril from hunger.

The RF had considered expanding its programs to India since the late 1930s, when it became clear the Foundation could no longer work in China. At the same time, the RF realized it could not work effectively in India until colonial rule ended and turned to work in other countries, including Mexico. The Mexican Agriculture Program (MAP) served Mexican interests, but always aimed to develop techniques that would succeed in other regions. After achieving independence in 1947, India presented a significant test case for applying MAP tools and techniques outside the Latin American context.

During the first ten years of independence, India sought to foster social equality. Imperial farms were broken up and redistributed to peasant workers. The new landowners were encouraged to adopt modern technology, but they lacked adequate funds and training to make use of scientific advances. Furthermore, rice had been the Indian dietary staple, but the most productive growing regions were in now-separate Pakistan. India began to import much of its food, buying rice from Pakistan and wheat from the United States. But the fledgling nation needed to develop its own resources.

To work effectively in India, the RF needed to adjust its usual approaches. The Foundation liked to work with established institutions in a country, trusting to their long experience and resources to help programs succeed. But, the Indian government preferred to emphasize equality and strengthen weaker institutions. Government officials also wanted more direct oversight of RF allocations than the Foundation normally allowed. It took several years for the RF and the Indian government to establish mutually acceptable terms of agreement.

India’s vast size, its burgeoning population, its pervasive poverty, and its lack of infrastructure compelled the RF to proceed cautiously. Before it could embark upon any comprehensive program in India, extensive investigative and evaluative work was essential. As one RF official remarked, “A nibbling policy is absolutely no good, because India is too vast and complex to be tackled this way.”Raymond B. Fosdick, “India,” May 22, 1947. RAC, RG 1.2, Series 460, Box 1, Folder 1.

Corn in a Region of Rice

India’s interest in corn spiked at the end of World War II, when the Indian Council of Agricultural Research (ICAR) launched a breeding program in the Punjab region. Hybrid corn had produced sensational results in the United States, but despite importation of over 50 hybrid varieties, India simply did not have a seed industry that could maintain the purity of the lines required to create hybrids. In 1954 Edwin J. Wellhausen and Ulysses J. Grant, RF corn specialists from the Mexico and Colombia programs, were invited to evaluate the growth of corn in India. These two scientists, along with Ralph W. Cummings (later appointed director of the RF Indian Agricultural Program), devised an all-India corn improvement program.

The RF convinced ICAR to convene Indian corn scientists annually and to consolidate research findings. It established four research centers and imported seeds from the Caribbean, Central America, and Mexico. This infrastructure, plus the new stock, enabled Indian scientists to develop sophisticated double-cross hybrids. As with other grains, the goal was to create shorter, sturdier, higher yielding plants that were resistant to disease and insects. This consolidated program, focused on a single grain, was so successful that it became a model for programs designed to grow other grains. Eventually, it sparked the Inter-Asian Corn Program, headquartered in Thailand and serving more than half a dozen Southeast Asian countries through information exchange, trade in breeding materials, and educational training.

Wheat breeding in India dates to the early 1900s, but by the 1940s, the genetic base of Indian wheats was so narrow that yield had stagnated at 11 to 12 bushels per acre. RF scientist Norman Borlaug’s work in Mexico had, by contrast, utilized stock from around the world.

In 1963 the Indian and Pakistani governments invited Borlaug and Haldore Hanson of the Ford Foundation to assess their wheat programs. Borlaug returned to Mexico and shipped four main varieties and over 600 smaller sample varieties to the Indian Agricultural Research Institute (IARI) in New Delhi. In their first year, these varieties yielded over 55 bushels per acre. India quickly moved to establish a nationwide program modeled on the all-India corn program. But Borlaug’s subsequent visit in 1965 revealed that scientists had planted the Mexican varieties without adhering to fertilizer and weed control techniques that had been developed by MAP scientists. The resulting plots were sparse. However, two plant scientists trained by Borlaug in Mexico had cultivated a few plots using MAP techniques, and these thrived. Borlaug’s critical summary report convinced India to adopt these techniques as well.

One of the first varieties shipped, a simple cross labeled No. 8156, became the base for a family of wheat that transformed Southeast Asia. India renamed the variety Kalyan Sona, or “golden savior.” In the spring of 1966, crop yield was the largest ever experienced in Southeast Asia, even though rainfall had been scant. For the next growing season, India ordered 18,000 tons of wheat seeds, costing over $2.5 million, the largest seed purchase in the world to that point. India’s purchase inspired Pakistan and Turkey to submit even larger orders the following year. When normal rainfall returned in 1968, the imported Mexican varieties produced so much grain that it was hard to find enough labor to harvest and space to store the crops.

Return to Rice: Importing an “Accident of Nature” in a Suitcase

Rice has always been the staple crop of Asia, but it was the last grain tackled by the RF in India. This delay was due to the complicated nature of breeding and growing rice. Compared to wheat, rice requires more water and is more limited by growing season. A formal attempt to improve rice production did not begin until 1966. The first experimental crop was semidwarf variety T(N)-1, planted in 1964-65. T(N)-1 was originally developed in Taiwan from a parent variety, Dee-geo-woo-gen, which had almost been overlooked: it was discovered growing in a single farmer’s field, brought to Taiwan’s national experiment station, and eventually to the RF-supported International Rice Research Institute (IRRI). In 1964 Dr. G.V. Chalam of the Indian government’s National Seeds Corporation returned from a visit to IRRI with two kilograms of semidwarf variety T(N)-1 in his suitcase.

The 1964-65 experiment proved T(N)-1 might yield up to eight times as much grain per hectare as Indian farmers typically grew. Ralph W. Cummings, then field director of the RF Indian Agriculture Program, arranged to import a ton of the seed from IRRI. RF breeding programs used T(N)-1 to produce Jaya, an especially high-yielding hybrid. Meanwhile, IRRI scientists developed variety IR8, which came to be dubbed the “miracle rice” throughout Asia. These two varieties formed the backbone of the RF’s rice program in India. By 1966 the RF and Ford jointly funded the importation of 20 tons of IR8.

Constant research and development was required to change the growing habits of India, as well as education and extension to farmers. The RF once again joined with the Ford Foundation to establish an all-India rice program modeled on the success of the RF’s all-India corn program. The RF provided support for one of its longtime staff members, Wayne H. Freeman, to co-direct the program. It created seven zonal stations, including IARI, and set up headquarters at Andhra Pradesh Agricultural University near Hyderabad. The two foundations, along with the United States Agency for International Development (USAID) and the Colombo plan, built on Ford’s investment in its Intensive Agricultural Districts Program to spread new rice growing techniques across India. As with the corn program, rice scientists met twice a year to share research results. The program also tackled complicated related aspects of rice improvement, including new fertilizer development, pest control measures, and modern machinery.

In response to the new cereal grains available, the Indian government passed the National Seeds Act in 1966 and implemented the National Seeds Corporation, a distributive agency. As it had done throughout its history, the RF’s signal contribution in India was supplying already trained personnel and providing new training opportunities for Indian scientists through fellowships. It also supplied professional advisors experienced in the seed business and underwrote travel for the Indian Seed Review Team to travel worldwide to study other private seed companies.

The Turnaround Years and Beyond

After devastating droughts from 1965-67, the worst in 40 years, the agricultural profile of India began to turn around. By the 1967-68 growing season, India’s food supply was gaining at 4% per year, while the population grew at only 2.5%. This meant that India could finally move from subsistence farming to becoming food self-sufficient and later even a commercial exporter of grain. This rapid recovery rested upon the infrastructure built by the RF over the course of more than 10 years in partnership with the Ford Foundation, international agencies, and the Indian government.

Rice, the final crop addressed by RF programs, would continue to be improved by RF programs throughout Asia over the course of the next forty years. Once higher yield had been secured, much work remained, including the revision of pricing structures, the provision of cutting edge machinery, and the development of markets. Furthermore, enhancing nutrition and palatability became increasingly possible through the techniques of molecular biology.

By the early 1980s the RF shifted its focus from farming and distribution to renewed support for scientific research through its International Program in Rice Biotechnology (IPRB). One of the core approaches of this program was building a research network across subtropical countries, including India, as well as developing infrastructure and rice varieties tailored to the subtropics. These IPRB commitments evolved directly from the Foundation’s long experience on the ground in India. 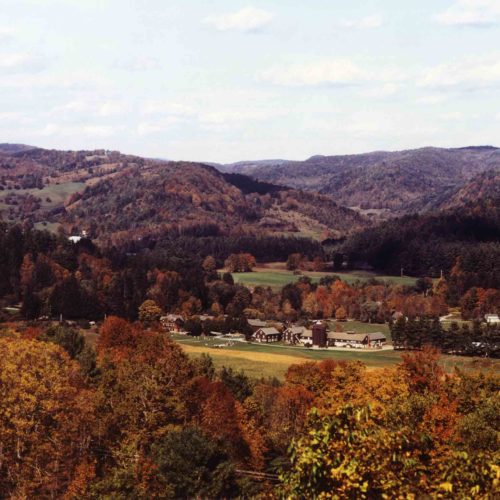